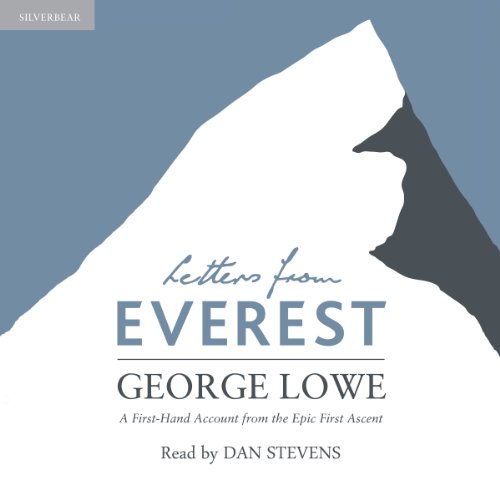 Sixty years after Mount Everest was first climbed, this unique book of letters celebrates, in a very personal way, this most majestic of mountains. With exclusive access to the private archives of pioneering New Zealand climber George Lowe, this is a welcome tribute to an unsung hero.

The ascent of Everest in the summer of 1953 was one of the 20th century’s great triumphs of exploration. George Lowe’s efforts on the mountain were crucial to the endeavour. He was one of the lead climbers, forging the route up Everest’s Lhotse Face without oxygen and later cutting steps for his partners up the summit ridge. In this touching book, read by Dan Stevens, a trove of unpublished letters from the Lowe collection are brought together for the first time, to describe the day-by-day moments of this historic expedition as never before. As often as he could, George wrote letters home to his family. In turn, they could then keep their friends updated with news, frequently before the local newspapers had full accounts of the climb.

These rare letters from Everest provide a vivid, behind-the-scenes witness of a climb that would make history. In clear and elegant prose, this is a unique testimony of a superlative human achievement.