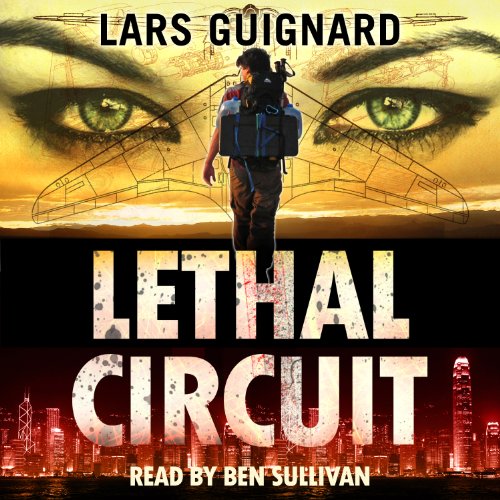 WARNING: You will not be able to let it go until you listen to the very last minute.

A Chinese satellite is on a crash course with Earth. It contains enough plutonium to irradiate a large city.  And that's the good news....

Michael Chase is a 26-year-old backpacker, a recent college graduate, an amateur. He flew to Hong Kong to find his missing father. Four hours later, he's running for his life. The Chinese secret police want him dead. The Conspiracy wants him dead. And the one person who he thinks is on his side, may want him dead too. If Michael is going to live, he'll need to find a hidden piece of Nazi technology lost since World War II. And he'll have to do it before anyone else. Because if he doesn't, a little plutonium is going to be the least of his problems. Can Michael Chase team up with a beautiful but deadly MI6 agent to locate a lethal piece of Nazi technology that will save the world?

If you can't get enough of the action of Lee Child and Vince Flynn, the intrigue of Robert Ludlum, and the adventure of Clive Cussler and James Rollins, you are going to love Lethal Circuit!

To make it a 4 star audio book it would need a far far better speaker and a story that doesn't seem like written by a fantasizing pubescent.

Was hat Sie am meisten an Lars Guignards Geschichte enttäuscht?

Listening to that story reminds me of watching a d-list very low budget movie that would never have a chance of running in a cinema. What a shallow story of a kid who turns out to be a superhero. I was always waiting for Michael to put on his cape and lift off...

The speakers voice (or are there different speakers?) sometimes changes it's tone right in the middle of a sentence... that doesn't make it appear very professional.

Great story with some recording issues

Michael Chase is on a mission: he wants to find out why and how his father disappeared because he can't believe him to be dead. But having arrived at his destination China, he quickly finds out that nothing in his past and about his father has been like it seemed. His dad was a CIA agent and very quickly, Michael is involved in a chase after the Horton 21, an airplane that is powered by cold fusion. Finding this mythical technology is now the only way to stop the out-of-control satellite spiralling towards California.

Naturally, he isn't the only one looking for this device. Michael becomes engaged in a fight with international secret agiencies, Chinese businessmen and criminials, all following their own goals. He realizes that he cannot trust a single person other than himself. And he has to rely on the skills and lessons his father has provided him with throughout his childhood.

Lethal Circuit is a decent spy thriller which contains all typical elements of this genre. You can never be too sure who's on whose side, constantly looking for the mole or the character who will inevitably betray the hero. The plot is extremely fast with hardly a chance to catch a breath. A few times, I wondered how a complete amateur like Michael would keep up in this game of professionals. He seemed very calm, even in high-adrenaline situations, experienced with martial arts and weapons, has quick wits, and doesn't hesitate to do what is necessary, even the most gruesome things. So, he's definitely not your run-of-the-mill backpacker.

I really liked the flashbacks picturing Michael's childhood and his father's lessons for him. They provided more depth for character development and also for the plot. The author clearly tried to flesh out his characters other than just letting agents move across the chess board like puppets.

Now let's talk about what makes an audiobook so special: the narrator and the reading. The narrator has a great voice and he manages to keep up tension while reading which was great. But, the recording was the most unprofessional that I've ever listened to. Every single line that was cut into the reading was bluntly evident because it sounded like a child cutting and glueing together two different tapes. Even within a single paragraph it sounded like the speaker changed his distance to the microphone, his intonation, sometimes I even wondered whether it was the same speaker at all. At the beginning, I couldn't believe it was only one speaker.

Especially the narrator of the childhood flashbacks sounded off (in addition to him reading like he was speaking to an audience of 10-year-olds). All these changes soundwise made it hard to differentiate between the characters. Usually, the speaker tries to give each MC a unique voice. But the speaker's sound even changes within reading one paragraph, thus the reading loses a lot of its atmosphere. This was very annoying and affected my overall impression of the audiobook.

The book could have been amazing with a better recording. But still it was a great audiobook and I enjoyed the plot and the characters a lot!