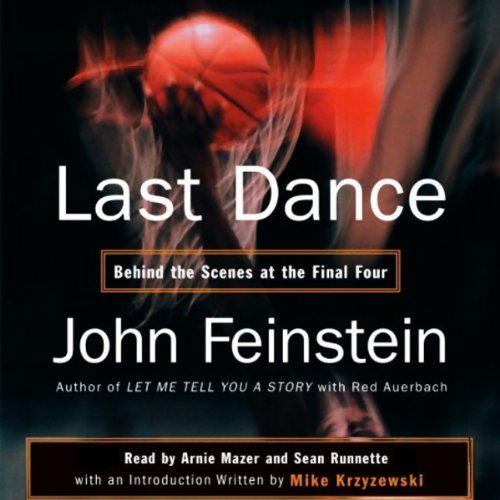 When college basketball teams make it to the NCAA tournament, they say they're "going to the dance". John Feinstein's riveting new book is the story of the last dance: the Final Four. There is no event in sports quite like it. The Final Four draws millions to their televisions and thousands to a chosen city; attendance is topped only by the Super Bowl. It is the epicenter of sports madness, a circus of media, coaches, and fans swirling around the four teams talented enough to have made it to the end.

Tracking the four teams in 2005's Final Four, Michigan State's Spartans, the University of Louisville's Cardinals, the University of Illinois's Fighting Illini, and the University of North Carolina's Tar Heels, John Feinstein tells the story of a definitive and dramatic tournament. Here are the stories of UCLA's John Wooden, UNC's Dean Smith, and Duke's Mike Krzyzewski, telling of Final Four dynasties that defined the sport. Here are great players like Bill Bradley, Michael Jordan, Christian Laettner, and Sean May, who thought they'd never make it to college basketball's final weekend. Here are the late nights at the coaches' hotel, where careers are advanced (or not). Here are the players in the 2005 Final Four trying to practice, eat, rest, and play, knowing that they will be remembered by these games for the rest of their lives.

"This is a terrific book....The anecdotes are entertaining, and the insights into the tournament's logistics fascinating, but what will linger most are the remembrances of players, especially those who ended up on the losing side. The best books take us to places we've never been and let us feel what life there is like. Welcome to the Final Four, courtesy of John Feinstein." (Booklist)