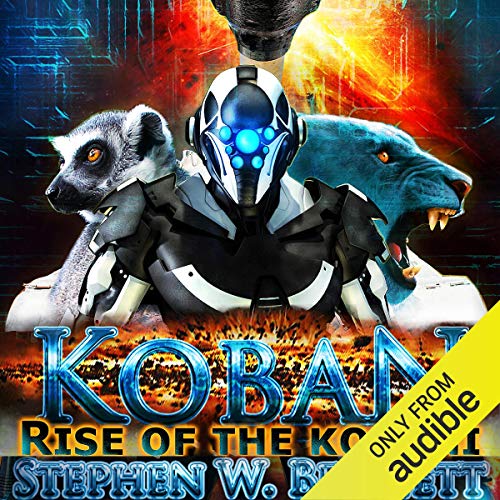 Koban: Rise of the Kobani

The Kobani use captured Krall ships to return to Human Space. They seek expert training for their genetically modified fighters, modern weapons and new medical technology. There's a possible block to this help in the form of death penalty laws of the Planetary Union, prohibiting gene modifications of humans. A holdover from the Gene War, which nearly extinguished humanity. A perilous descent through a war-torn planet's space defenses is a first step. A Krall ship and its heavily armed crew have to be destroyed on the ground, while a watching hostile Special Ops force decides if the Kobani should be trusted, or killed as Krall collaborators. Fighting their way between a rock and a hard place, they prove they are a match for the Krall. Exploration at home reveals startling alien neighbors, and a habitable world next door. A remarkable genetic discovery there will forever alter the Kobani. Winning allies, Captain Mirikami forges a bold and dangerous plan, to strike deep into the heart of Krall territory. A place the enemy is confident that puny "animals" can't reach, let alone attack. Simultaneous Kobani raids damage Krall war manufacturing, buying time for humanity. However, the Krall have a deadly ancient weapon that none expected. Retaliatory escalation of the war has been triggered, and if it doesn't go as the Krall plan, entire planets and their populations could be shattered. Read Book 1 (Koban), and Book 2 (Koban: The Mark of Koban). Book 4 (Koban: Shattered Worlds) is coming soon.