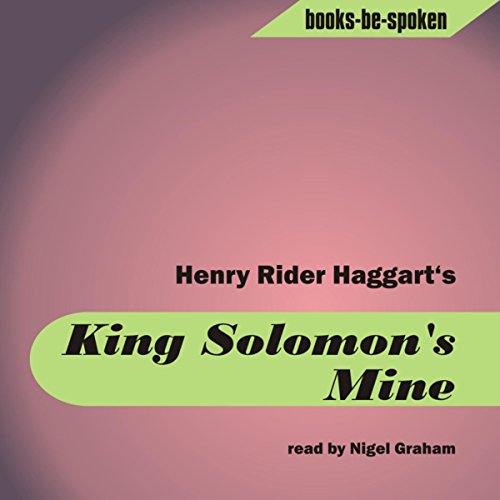 Accompanied by Sir Henry Curtis, Captain John Good and their native servant Umbopa, the big-game hunter Allan Quatermain sets off to reveal the fate of Curtis' missing brother, who has gone to look for the treasure of King Solomon in the mythical land of the Kukuanas in Africa. "King Solomon's Mines" is a story full of suspense and tension based on Haggard's own experiences in Africa. With his book Rider Haggard, alongside Robert Louis Stevenson, pretty much established a new literary genre: the Adventure Novel.

Henry Rider Haggard was born on June 22, 1856 in West Bradenham Hall, Norfolk. In 1875, he went to South Africa as secretary to the governor of Natal. The writer also served on several government commissions concerning agriculture and was knighted in 1912 and 1919 for these services. Haggard’s outstanding powers of imagination secure him a high rank in prose literature. He died in London on May 14, 1925.

Nigel Graham was born in Australia. Moving to London in 1959 he worked in many theatres round the country and in London’s West End. Television appearances included such popular series as Coronation Street and Z Cars. He has a long association with BBC radio and for many years he has been increasingly drawn towards Audio Books and has so far recorded more than 200 books.

Please note: This audiobook is in English.