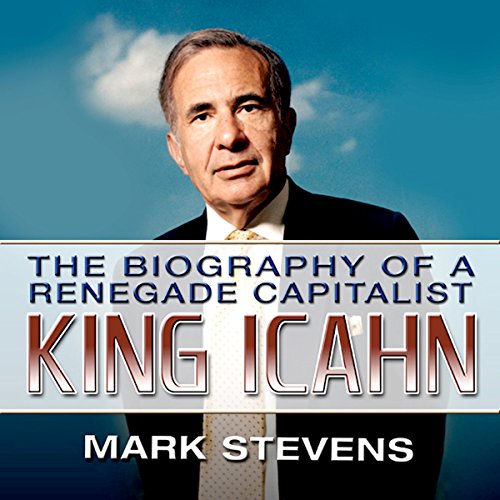 "I'm like the gunfighter you hire to save the town. That gunfighter is there to do good...but he'll only do what he does if he knows he'll get paid for it."
—Carl Icahn

In this dramatic, deal-by-deal portrait of legendary and, until now, secretive financier Carl Icahn, best-selling business writer Mark Stevens takes us behind the scenes of some of the biggest deals in U.S. corporate history: Icahn's multibillion-dollar raid on Phillips Petroleum; his bold move on Texaco's hidebound management, which netted him $500 million in the largest single transaction ever recorded by the New York Stock Exchange; Icahn's prolonged battle with CEO David Roderick to break apart the once mighty steel giant USX; and his stunning takeover of TWA.

To write this fascinating audiobook, Mark Stevens has utilized to the ultimate his incisive investigative skills and his extraordinary access to Icahn himself as well as Icahn's friends, associates, adversaries, and critics - those who rode on his takeover bandwagon, and those who fell beneath its wheeling and dealing. The story he has to tell is that of a bookish boy from Bayswater who went to Princeton, studied philosophy, dropped out of medical school, landed as a minor player on Wall Street, and then had a billion-dollar epiphany - a means of "controlling the destiny of corporations" that would ultimately earn him his fortune.

A fascinating tale with a cast of characters that includes Michael Milken, Ivan Boesky, T. Boone Pickens, Dennis Levine, and most of the other key players of the '70s and '80s takeover era, King Icahn is the first biography of the business buccaneer who changed the course of corporate America.

Interesting, but staying too much on the surface

I would have expected to learn much more about the person. Overall, it was a description of his general approach of taking over control in companies. Boring after the second description. I would have like to understand what he thought, how he structured his life and work...