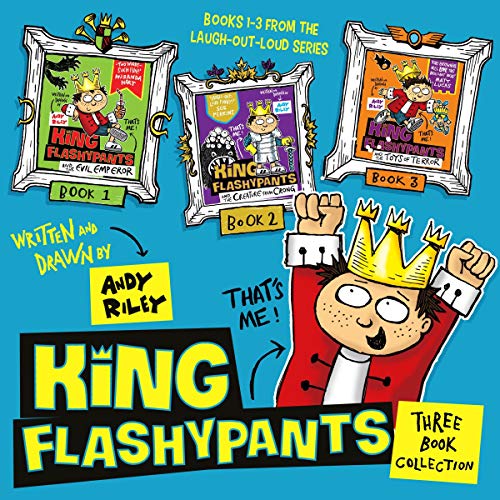 The first three audiobooks in the laugh-out-loud series.

In King Flashypants and the Evil Emperor, the evil Emperor Nurbison has arrived, accompanied by scary striding music. He has had his eye on King Edwin's kingdom for some time and intends to take over! When the emperor builds a fake dragon out of a cow, green crepe paper, furry monster novelty slippers and two birthday cake candles, to scare Edwin's peasants, Edwin must come up with the first sneaky plan he's ever had in his life....

King Flashypants and the Creatures from Crong: when rumours of a huge and terrifying monster called the Voolith reach Edwinland, King Edwin Flashypants decides that, to be a proper king, he needs to go and fight it. Meanwhile, Emperor Nurbison has had a similar idea, but he has a much sneakier plan for what he can do with the Voolith. And it involves squishing Edwinland.

In King Flashypants and the Toys of Terror, something weird is happening in Edwinland - Emperor Nurbison isn't evil any more! He's doing stuff like smiling and making toys of himself for the peasants. Is he up to something? Probably. But what can it be?

"Brilliantly original and hilarious...it's nearly as good as one of my books." (David Walliams)