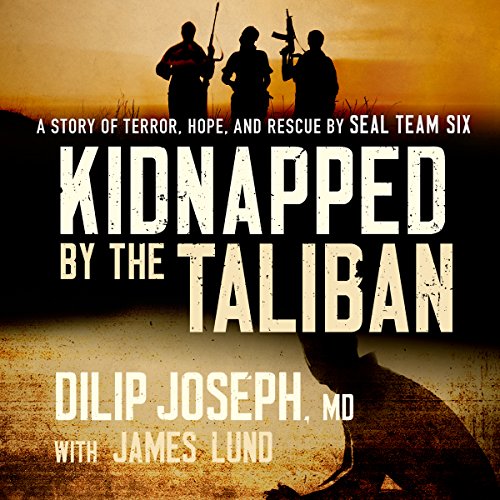 Kidnapped by the Taliban

Kidnapped by the Taliban

An American physician in rural Afghanistan faces the unimaginable.

Dilip Joseph dreams of life as a medical humanitarian. In 2009 his dream comes true as he joins the staff of Colorado-based Morning Star Development, a nonprofit community and economic development organization. On December 5, 2012, Dr. Joseph and two native colleagues, en route from a medical clinic in an Afghan village to Kabul, find themselves face-to-face with four men carrying AK-47s. Forced at gunpoint into the back of a truck and driven to a remote location, the men are sure they are headed to their execution.

Kidnapped by the Taliban is the dramatic account of Dilip Joseph's terrifying journey. He rides a roller-coaster of emotions wondering if he will ever see his family again. Listeners will marvel at Dilip's surprising bond with one of his captors. After four days of uncertainty, gunfire announces the arrival of Navy SEAL Team Six, the elite group of soldiers that took down al-Qaeda founder Osama bin Laden. SEAL team member Nicolas D. Checque loses his life in the rescue, as do the Taliban kidnappers.

Though processing the ordeal is a lifetime pursuit, Dilip unexpectedly finds it gives him new reasons to hope. His experience reveals to him and the listener that even the Taliban, a society that so many dismiss as pure evil, includes real human beings in search of a better, more peaceful life. And in that lives hope for us all.