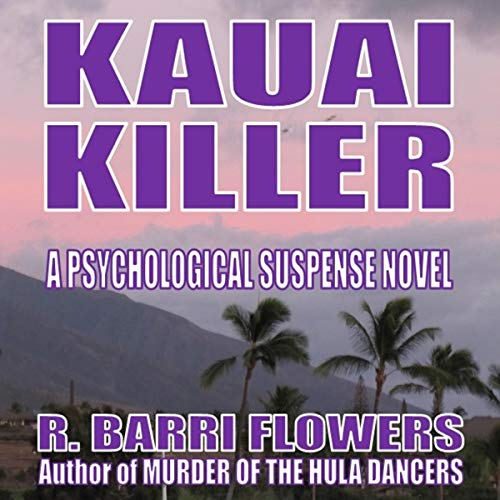 Kauai Killer is a psychological suspense audio novel by award-winning crime writer R. Barri Flowers, author of Seduced to Kill in Kauai, Dead in Kihei, Murder in Honolulu, and Murder of the Hula Dancers.

When Ian Butler and Suzanna McAllister got married on the breathtaking Hawaiian island of Kauai, it seemed like a match made in heaven. Years later, while living in Providence, Rhode Island, Suzanna found herself haunted by the murder-suicide of her parents when she was a little girl, the result of infidelity. Obsessed with the thought that Ian was also a cheater, Suzanna finally sought counseling to save her marriage and her desire to have a family.

Ian, 35 and a successful stockbroker, loved his gorgeous wife, who was three years younger, and wanted nothing more than to see her get past unwarranted fears of infidelity on his part. But after doing a colleague an innocent favor, Ian’s life turns upside down in ways he could never have anticipated in his worst nightmares.

Suzanna is shot to death in their home, and Ian is arrested and charged with her murder, implicated by the victim herself in a 911 call. Though the evidence points toward guilt, a good defense lawyer wins him an acquittal.

Five years later, Ian has moved to the tranquil island of Kauai, where he starts a new career as a writer of financial thrillers and begins a relationship with an attractive artist named Jeri Chen, while keeping his painful past where it belongs.

Unbeknownst to Ian, Jeri has secrets of her own. With a new identity, she is on the run from a hit man working for a notorious Dallas drug kingpin.

But the past found a way to catch up to both of them in ways neither could have expected, placing their lives in danger and their future in doubt.

Kauai Killer will take listeners from life on the mainland to the beautiful paradise of Hawaii in a suspenseful psychological drama of love, obsession, vengeance, and murder.

A bonus short story and novella are included with the novel.