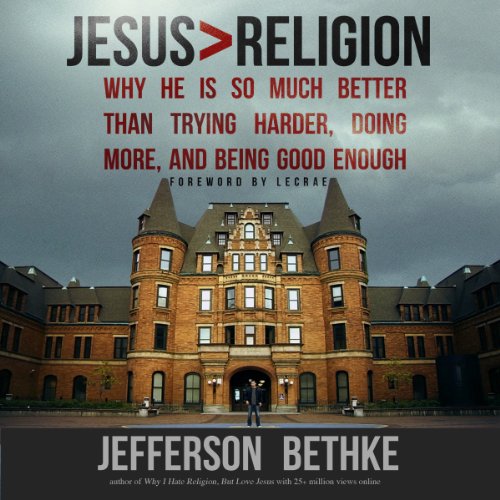 Abandon dead, dry, rule-keeping and embrace the promise of being truly known and deeply loved.

Jefferson Bethke burst into the cultural conversation in 2012 with a passionate, provocative poem titled “Why I Hate Religion, But Love Jesus.” The four-minute video of Bethke’s spoken-word performance literally became an overnight sensation, with seven million YouTube views in its first forty-eight hours (and 24+ million within a year). The message hit like a blizzard on social-media sites and in forwarded e-mails, triggering an avalanche of responses running the gamut from encouraged to enraged.

In Jesus > Religion, Bethke unpacks the stark contrasts that he drew in the poem - contrasts between teeth gritting and grace, law and love, performance and peace, despair and hope. With refreshing candor, he delves into the motivation behind his message, beginning with the unvarnished tale of his own plunge from the pinnacle of a works-based, fake-smile existence that sapped his strength and led him down a path of destructive behavior.

Bethke is quick to acknowledge that he’s not a pastor or theologian, but simply a regular, twenty-something, soul-starved searcher who cried out for a life greater than the one for which he had settled. Along his journey, Bethke discovered the real Jesus, who beckoned him beyond the props of false religion.

A good book to shake you awake

Jefferson Bethke makes it clear point between the difference from religion and Christianity that we should follow. He is Using language which is cutting and beautiful to make it clear. Since I’m listening and reading at the same time; the audiobook is a little bit too fast. so I have to slow him down which makes his voice sound a little bit weird. other than that The book is brilliant. The strugle si real not only in America. I for instance live in Germany

This is a great book. Although the author is very young and it is his first book this book is fantastic.