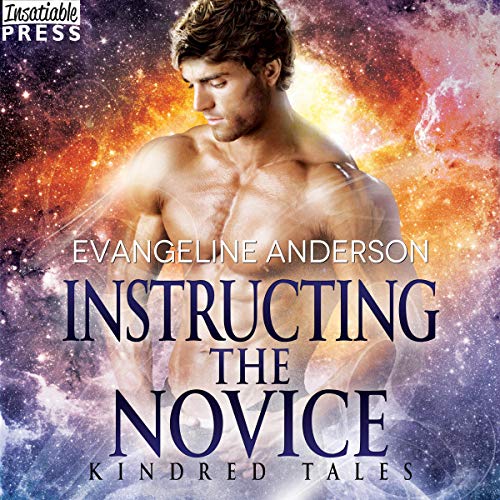 This is a Kindred Tales PLUS novel

A successful older woman who has given up on love
A younger warrior who desires her desperately
When the two of them are sent to the sinister Tower of the Higher Mind
Where Lizabeth is Mistress and Lone is her Novice
Will it bring them together...or tear them apart?
You’ll have to listen to Instructing the Novice to find out.

Lizabeth Paige is mortified. Ever since a terrorist introduced the Xi-46 lust compound into the air ducts of the Mother Ship, she had been experiencing attacks of sexual needing that leave her helpless to resist her lustful urges. Much to her embarrassment, her assistant Lone helped her with the first attack, but she’s been managing on her own (though not very well) ever since. She feels drawn to Lone, but he’s much too young for her. Lizabeth tells herself it’s better if they keep their distance.

Lone has been in love with his boss from day one - he wants Lizabeth with his whole heart. Helping her through her first needing attack was like a fantasy come true, but now, for some reason, Lizabeth is trying to cut him out of her life. Desperate to bring her closer, he is elated when the Kindred High Council decides to send the two of them to The Tower of the Higher Mind for some extra training.

But there are dangers lurking at the Tower, which is located at the top of the Sacred Mountain. At its base live the Friezens - a tribe of savage, misogynistic natives who believe women are only useful for sexual-sacrifice. And in the Tower itself, some very strange customs hold sway. Lizabeth is now a “Mistress” and Lone must be her “Novice”, serving her in every possible way. Pulled between two extremes, will the terrors of the Tower draw them together...or kill them?

You’ll have to listen to Instructing the Novice to find out.

Warning: Please be aware that there is a scene in this book that listeners who have suffered attacks or abuse may find triggering. Please listen with caution. (PS - I promise it all turns out okay in the end! Hugs and Happy Listening! Evangeline)