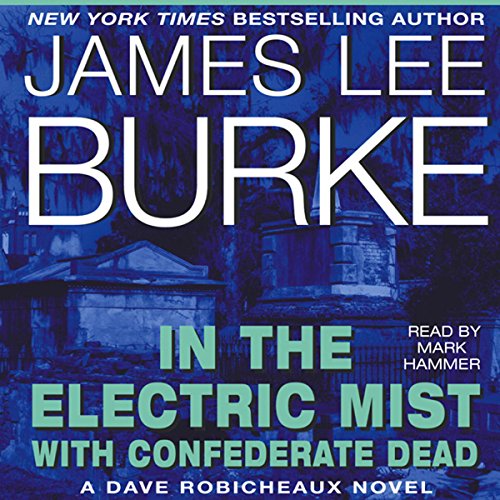 In the Electric Mist with Confederate Dead

The image of the dead girl's body lingered in detective Dave Robicheaux's mind as he drove home. After seeing the young victim's corpse, the last thing he needed to come across was a drunk driver. But when he saw the Cadillac fishtail across the road, Robicheaux knew the driver was in trouble. What Dave didn't realize, was that by pulling the car over, he was opening his murder case wider than he could ever imagine.

The driver, Elrod Sykes, in New Iberia to star in a movie, leads Dave to the skeletal remains of a black man that had washed up in the Atchafalaya swamp. So begins a mystery that takes Dave back to an unsolved murder - a murder that he witnessed in 1957. Haunted by the past as he confronts the gruesome present-day rape and murder of young prostitutes, Robicheaux must also contend with a new partner from the F.B.I., and the local criminal gentry. But for Dave, the answers he seeks lie somewhere in the bayou mist with the ghosts of soldiers long since forgotten...

A masterwork of detective fiction, In the Electric Mist with Confederate Dead is James Lee Burke's most suspenseful work to date.

A beautifully read story with the authentic accents of the southern states of the USA, in which Dave is his usual dogged and complex self. The only drawback is that Clete doesn't appear......