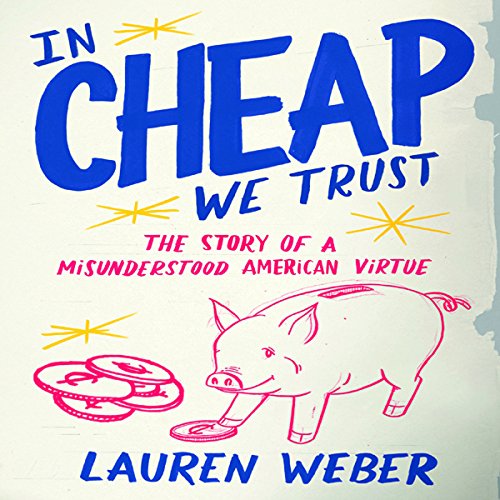 In Cheap We Trust

In Cheap We Trust

Cheap. Cheap suit. Cheap date. Cheap shot. It's a dirty word, an epithet laden with negative meanings. It is also the story of Lauren Weber's life. As a child, she resented her father for keeping the heat at 50 degrees through the frigid New England winters and rarely using his car's turn signals - to keep them from burning out. But as an adult, when she found herself walking 30 blocks to save $2 on subway fare, she realized she had turned into him.

In this lively treatise on the virtues of being cheap, Weber explores provocative questions about Americans' conflicted relationship with consumption and frugality. Why do we ridicule people who save money? Where's the boundary between thrift and miserliness? Is thrift a virtue or a vice during a recession? And was it common sense or obsessive-compulsive disorder that made her father ration the family's toilet paper?

In answering these questions, In Cheap We Trust offers a colorful ride through the history of frugality in the United States. Readers will learn the stories behind Ben Franklin and his famous maxims, Hetty Green (named "the world's greatest miser" by the Guinness Book of Records), and the stereotyping of Jewish and Chinese immigrants as cheap.

Weber also explores contemporary expressions and dilemmas of thrift. From dumpster-diving to economist John Maynard Keynes's "Paradox of Thrift" to today's recession-driven enthusiasm for frugal living, In Cheap We Trust teases out the meanings of cheapness and examines the wisdom and pleasures of not spending every last penny.

"[A] terrific audio book about the history of thrift (and spending) in our great country….Weber doesn't scold us, thank God. She just invites us to take a closer look at how we live our financial lives." ( The Washington Post)