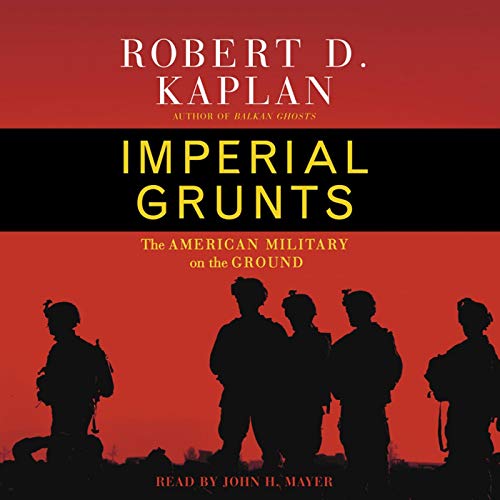 In this landmark book, Robert D. Kaplan, veteran correspondent for The Atlantic Monthly and author of Balkan Ghosts, shows how American imperialism and the Global War on Terrorism are implemented on the ground, mission by mission, in the most exotic landscapes around the world.

Given unprecedented access, Kaplan takes us from the jungles of the southern Philippines to the glacial dust bowls of Mongolia, from the forts of Afghanistan to the forests of South America, not to mention Iraq, to show us Army Special Forces, Marines, and other uniformed Americans carrying out the many facets of U.S. foreign policy: negotiating with tribal factions, storming terrorist redoubts, performing humanitarian missions, and training foreign soldiers.

In Imperial Grunts, Kaplan provides an unforgettable insider's account not only of our current involvement in world affairs, but also of where America, including the culture of its officers and enlisted men, is headed. This is the rare book that has the potential to change the way readers view the men and women of the military, war, and the global reach of American imperialism today.

Never before has America's overarching military strategy been parsed so incisively and evocatively. Kaplan introduces us to lone American servicemen whose presence in obscure countries is largely unknown, and concludes with a heart-stopping portrait of marines in the first battle in Fallujah. Extraordinary in its scope, beautifully written, Imperial Grunts combines first-rate reporting with the sensitivity and insights of an acclaimed writer steeped in history, literature, and philosophy, to deliver a masterly account of America's global role in the twenty-first century.

"One of the most important books of the last several years." (Tom Brokaw)
"An experienced military journalist has created this worthwhile portrait of American ground troops, mostly in elite units, working with the armed forces of other countries to fight terrorism, to be sure, but actually doing a job once done by the Roman legions." ( Booklist)

I give this book only 3 stars because of its (rather embarassing) Americanocentricity and such statements as "France is selling off its Djibouti base to the US" etc..
Otherwise it is a rather interesting inside view into the US Armed Forces, even if I would not say that as a European I found it "comforting" to learn these details. If the social composition of the US Forces and their mindset is, as described by the author, I am even less surprised to see how often the US runs straight into a hard stone wall with their "military exercises" overseas. I found the religious aspects underlined by the author, especially the strong evangelist tendencies in the Armed Forces he describes (especially Marines and SOF) particularly unsetteling, since this gives a rather "crusader like" aspect to a variety of American military activities on the ground in many countries.
On the bright side: The book is well researched, well written and interesting to listen. The speaker has quite the twang to spin a good tale. I'd give him five stars for replicating local accents, too.