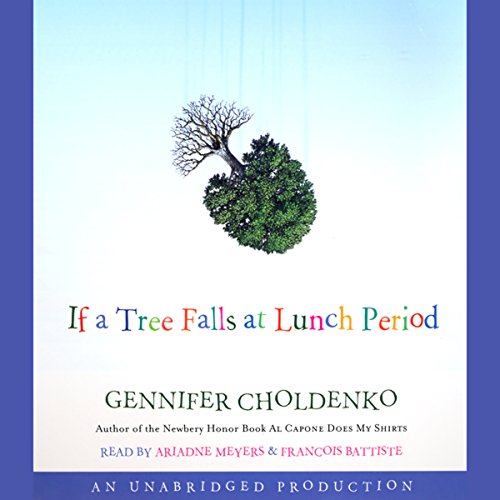 If a Tree Falls at Lunch Period

If a Tree Falls at Lunch Period

For Kirsten McKenna, the world is crumbling. Her parents are barely speaking to each other, and her best friend has come under the spell of the school's queen bee, Brianna. Only Kirsten's younger science-geek sister is on her side.

For Walker Jones, the goal is to survive at the new white private school his mom has sent him to because she thinks he's going to screw up like his cousin. (Walk keeps telling her, "Don't have to worry, Momma. Before I go bad I'll let you know, send a Hallmark card ready-made for the occasion. 'On the eve your son messes up'.")

But Walk is a good kid. So is his new friend, Matteo, though no one knows why Matteo will do absolutely anything that hot blonde Brianna asks of him.

Then, Kirsten discovers something that shakes her and Walk to their cores.

"Choldenko's talent for characters and conversation brings the two voices instantly to life in alternating points of view." ( Kirkus Reviews)
"The issues raised are spot-on for this age group....[an] under-the-microscope examination of the often cruel, always dramatic dynamics of junior high." ( Publishers Weekly)