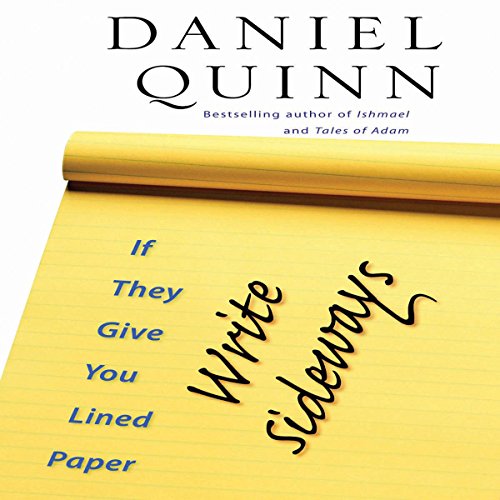 If They Give You Lined Paper, Write Sideways

In Ishmael, Daniel Quinn offered new ways of seeing and understanding human history and our collective future. His message was transformative for millions of people, and Ishmael continues to attract tens of thousands of new readers and listeners each year. Subsequent works, such as The Story of B and My Ishmael, expanded upon his insights and teachings, but only now does he finally tackle the one question he has been asked hundreds of times but has never taken on: "How do you do what you do?"

In If They Give You Lined Paper, Write Sideways, Quinn elucidates for listeners the methods behind his own thought processes, challenging and ultimately empowering them to view the world for themselves in creative, perhaps even revolutionary, ways.

If They Give You Lines Paper, Write Sideways also includes Quinn's never-before-published essays "The New Renaissance" and "Our Religions". There is a scientific consensus that global warming is approaching a tipping point beyond no return faster than had previously been predicted. Quinn has long portrayed humans as "a species of beings, which, while supposedly rational, are destroying the very planet they live on." So what are we to do? There has never been a plan for the future - and there never will be. But something extraordinary will happen in the next two or three decades; the people of our culture will learn to live sustainably - or not. Either way, it will be extraordinary. The sooner we understand this reality, the greater the chances that human society will transform itself, so that the human race might have a future.

"An originality and a clarity that few would deny." ( The New York Times)

Das sagen andere Hörer zu If They Give You Lined Paper, Write Sideways