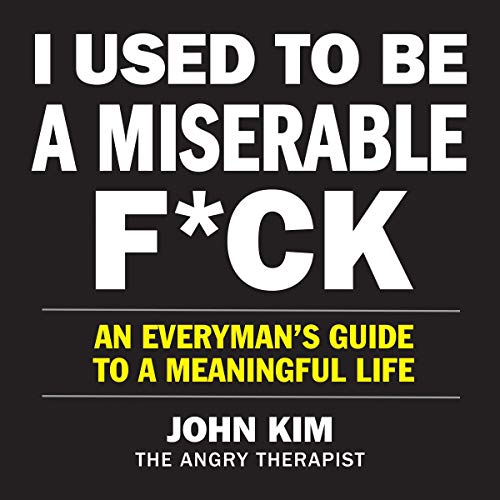 I Used to Be a Miserable F*ck

The Angry Therapist who has helped thousands of men find more happiness in their relationships and more purpose in their lives now shares his insights with everyone in this powerful guide - self-help in a shot glass - covering essential topics, from vulnerability and posturing to workouts and women.

Deep in post-divorce soul-searching, John Kim came to an astonishing realization: He was a miserable f--k who might just be to blame for the problems in his life. Armed with this new insight, he began The Angry Therapist blog - an admission that, while he was a licensed therapist and life coach, he was no better than the people who sought his advice. In his first post, “My F--king Feelings”, he wrote about the struggles and shortcomings that had led him to this point. As his work caught on, catapulting him into the role of unlikely and unconventional guide for thousands of people all over the world, Kim evolved from behaving like a boy to living like a man - and showed his clients how to do so as well.

In I Used to Be a Miserable F*ck, Kim delivers the dos and don’ts for stepping up and into manhood, which he defines by transparency and strength of character, not six-pack abs or a corner office. With his signature no-nonsense approach that will make you laugh and think, Kim takes you on a rugged, rough-and-tumble road trip of self-exploration and discovery, sharing his wisdom and insights, such as why:

We are not born men. We are born boys. The transition from misery to meaning is an internal process that requires work: reflection, pain, courage, and sometimes, a rebirth. Kim knows because he’s been there. The truth is, men weren’t meant to just pay bills and die. With this audiobook as your guide, you will love hard, walk tall, and find a life filled with purpose and passion.