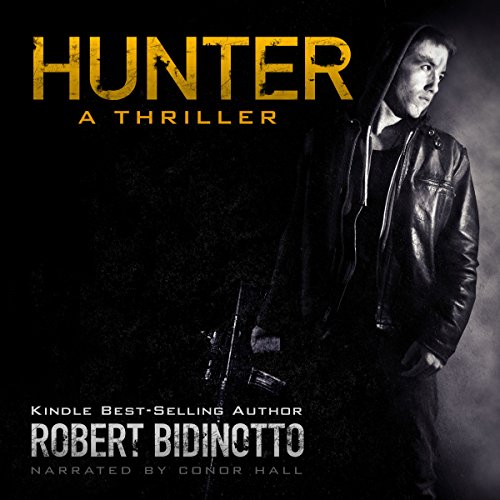 But each hides a deadly secret.

He is a crusading vigilante, on a violent quest for justice.

She is tracking this unknown assassin, sworn to stop him.

Neither realizes the truth about the other.

And neither knows that a terrifying predator is hunting them both....

From its first moments, Hunter takes you on a nonstop thrill ride: from the top floor of the CIA, to the marbled corridors of Capitol Hill...from the posh hotels of downtown Washington, to the city's mean, violent streets. It introduces a colorful new hero for our time - and a dazzling heroine every bit his equal.

A spy mystery...a crime thriller...a passionate romance: Hunter is a genre-bending novel unlike any you've read. Deviously plotted, filled with vivid characters, and propelled at a breakneck pace, it's a tale as memorable for its provocative ideas as for a rousing climax that has readers cheering.

"One of the best vigilante thrillers since Clancy's Without Remorse.... Hunter delivers in a way few thrillers do. From the opening kill shot to the climactic showdown, Hunter strikes home with the power and pinpoint accuracy of a Barrett M99....A fantastic debut thriller....A solid five stars." (Stephen England, author, Pandora's Grave)
"A joy...one of the great romances....To say that Hunter is a well-structured novel is an understatement....Even the lesser characters are vividly realized [and] memorably etched with a few deft strokes. Bidinotto seems incapable of creating a cardboard figure....I demand a sequel....I want to return to the exhilarating moral atmosphere of Bidinotto's story." (Roger Donway, The Atlasphere)
"This book has all the elements of an exciting thriller--strong conflicts, romance, action, and characters you care about. I especially loved the concluding paragraph, and you will too. Buy it." (Larry Abrams, author, The Philosophical Practitioner)