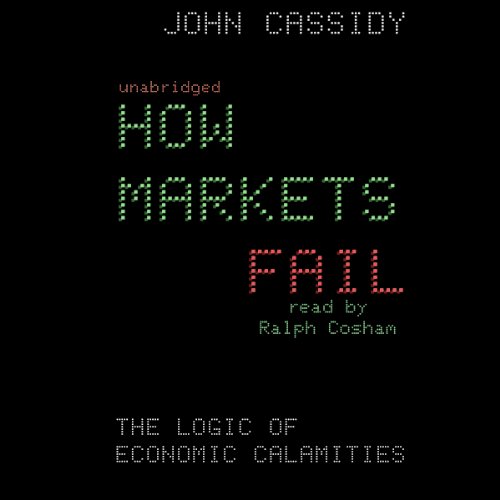 Behind the alarming headlines about job losses, bank bailouts, and corporate greed, there is a little-known story of bad ideas. For 50 years or more, economists have been busy developing elegant theories of how markets work - how they facilitate innovation, wealth creation, and an efficient allocation of society's resources. But what about when markets don't work? What about when they lead to stock-market bubbles, glaring inequality, polluted rivers, real-estate crashes, and credit crunches?

In How Markets Fail, John Cassidy describes the rising influence of what he calls utopian economics, thinking that is blind to how real people act and which denies the many ways an unregulated free market can produce disastrous unintended consequences. He then looks to the leading edge of economic theory - including behavioral economics - to offer a new understanding of the economy, one that casts aside the old assumption that people and firms make decisions purely on the basis of rational self-interest.

Taking the global financial crisis and current recession as his starting point, Cassidy explores a world in which everybody is connected and social contagion is the norm. In such an environment, he shows, individual behavioral biases and kinks - such as overconfidence, envy, copy-cat behavior, and myopia - often give rise to troubling macroeconomic phenomena, such as oil-price spikes, CEO greed cycles, and boom-and-bust waves in housing. These are the inevitable outcomes of what Cassidy refers to as "rational irrationality" - self-serving behavior in a modern market setting.

Combining on-the-ground reporting, clear explanations of esoteric economic theories, and even a little crystal-ball gazing, Cassidy warns that in today's economic crisis, conforming to antiquated orthodoxies isn't just misguided - it's downright dangerous. How Markets Fail offers a new, enlightening way to understand the force of the irrational in our volatile global econ...