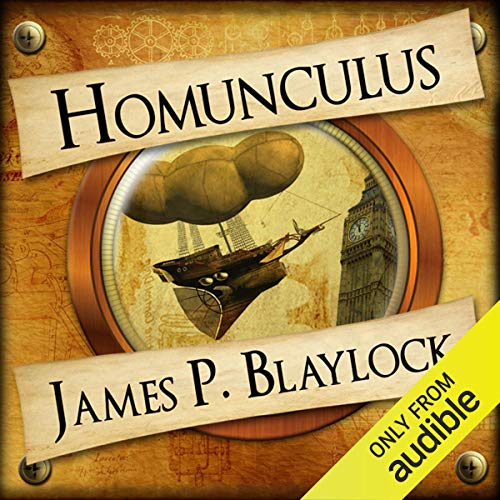 In 1870s London, a city of contradictions and improbabilities, a dead man pilots an airship and living men are willing to risk all to steal a carp. Here, a night of bangers and ale at the local pub can result in an eternity at the Blood Pudding with the rest of the reanimated dead.

A comic science-fiction novel first published in 1986. It took the Philip K Dick award that year, and was the second book in Blaylock's loose steampunk trilogy, following The Digging Leviathan (1984) and preceding Lord Kelvin's Machine (1992).

"Try this zany story on audio...Nigel Carrington was a brilliant choice. There are a lot of similar characters in Homunculus, but Mr. Carrington made them distinguishable. He also hit exactly the right tone with the humour which ranged from deadpan to black comedy to zany farce. In fact, I would specifically recommend the audio version of Homunculus just because Nigel Carrington's performance was a large factor in my enjoyment of the book…. As you may have guessed, Homunculus is zany and completely over-the-top in the right kind of way….If you’re in the mood for a surreal British comedy in the vein of Monty Python or Fawlty Towers, James P. Blaylock’s Homunculus will fit the bill nicely." (fantasyliterature.com)
“Fascinating, darkly atmospheric, absurd and brilliant. “ (rantingdragon.com)
“Blaylock keeps the action moving by cutting back and forth nimbly between various plots and characters (and points of view), bringing everyone together for a bizarre, but satisfying ending.” (greenmanreview.com)