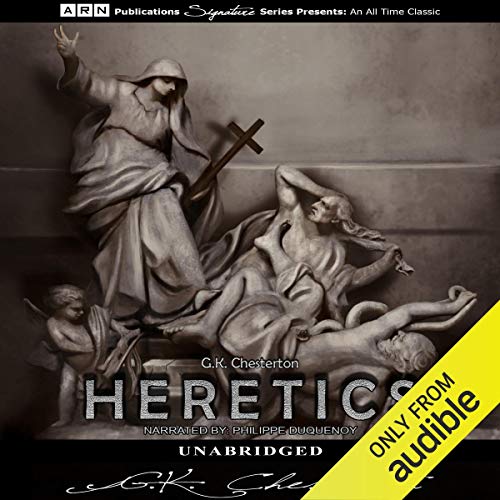 Chesterton's compilation of essays in Heretics discusses the difference in Orthodoxy and Heretics, rational vs. irrational, and denial vs. affirmation. He questions the reason for the existence of man and the universe and calls out many prominent figures in the artistic and literary fields for their unorthodox ideas; thus labeling them heretics. He will have you thinking of favorite authors like Rudyard Kipling, Oscar Wilde, and H.G. Wells in a new light, challenging their ideals and morals.

He pleads for people to believe in something, but not to believe in just anything. He rails against the greatest mental destruction, having everything constantly denied to you and nothing affirmed. Chesterton believes that anyone who did not believe in the Christian God, was dangerous and were very wrong.

Nearly every minute of this book has a quotable passage that will really get you thinking about the meaning of life and the different ideas that are being put into the world. Heretics reveals to the listener that their deepest held values, beliefs, and moral compasses may be deeply flawed from within. Chesterton also hones in on the concept that ideas are the most dangerous thing we have in life and there are very real consequences to those ideas.