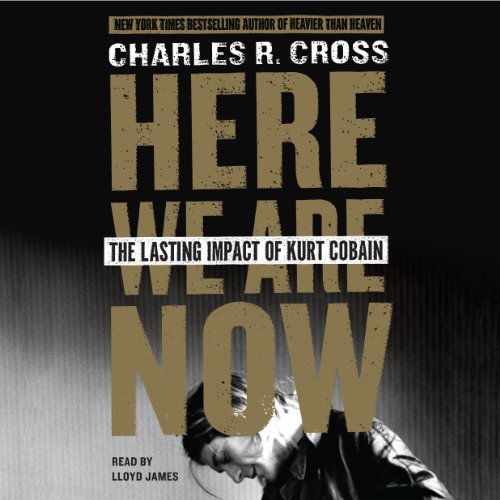 Here We Are Now

Kurt Cobain was the voice of a generation. Twenty years after his death, why does he still matter?

On April 5, 1994, 27-year-old Kurt Cobain took his own life. His desperation to kick drugs, his complicated relationship with fame, his tortured soul - all these elements came together in one terrible moment in Seattle, and the landscapes of music and pop culture were forever changed. Two decades have passed since Cross, a Seattle-based editor and writer and early supporter of Nirvana, lived the horror of that day on the front lines, fielding the phone calls as the media descended upon his city, desperately searching for an exclusive on the death of yet another young rock icon.

Here We Are Now attempts to answer where we - the fans, the music business and fashion industry, the addiction and recovery communities, Kurt's family - are, two decades later.

Cobain's life and work can be seen everywhere, from his indelible marks on music to his more subtle influence on gender and gay rights, the way we view suicide and drug addiction, and the very idea of Seattle as a cultural hub. Nirvana's music has touched multiple generations, and while the world has changed considerably since Nevermind was first released, in 1991, the status of that album only grows as years pass. Cobain and Nirvana are now part of a rite of passage through adolescence, and while "teen spirit" may have changed and evolved since the early '90s, the music remains authentic all the same. Simply stated, Kurt Cobain changed the cultural conversation in his all-too-brief life, and even after his shattering death. With interviews and commentary from all corners of the pop culture universe, from the people who knew Cobain to those who continue to help his legend grow, Here We Are Now explores what a singular life meant, and how that meaning can be measured, when and if it can be.