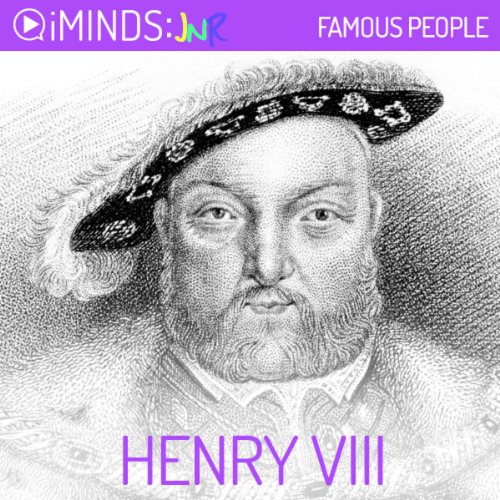 A short introduction to the many marriages and divorces of Henry VIII, with an emphasis on how they changed England. Young listeners learn all about Henry's life and various relationships, including the one with the Pope, and are introduced to the concept of the Reformation. The writers here do an excellent job of presenting the material in a matter-of-fact style that is accurate while still being suitable for kids. Performer Todd MacDonald narrates in a slightly sing-song voice that's great for children, with a light Australian accent that seems more charming than distracting.

Learn about the fascinating life of Henry VIII with iMindsJNR audio learning series for younger minds.

Henry VIII has gone down in history as a powerful, passionate English king. In his life, he married six times and fathered three future monarchs. But perhaps most incredibly of all, he changed religion in England forever by establishing the Church of England.

Henry was born the second son of King Henry VII and Elizabeth of York in 1491. But when Henry’s elder brother died in 1502, Henry became heir to the English throne. Seven years later, at the age of 18, Henry VIII became king.

Make your MP3 smarter with iMindsJNR MindTracks, intersperse with music and enjoy learning a little about a lot.. knowledge to help shape young minds.