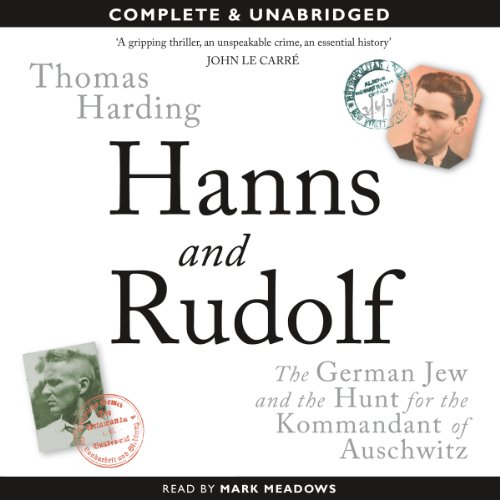 Hanns and Rudolf: The German Jew and the Hunt for the Kommandant of Auschwitz

Hanns Alexander was the son of a wealthy German family who fled Berlin for London in the 1930s. Rudolf Höss was a farmer and soldier who became Kommandant of Auschwitz and oversaw the deaths of over a million people. In the aftermath of World War II, the first British War Crimes Investigation Team is assembled to hunt down the senior Nazi officials responsible for the greatest atrocities the world has ever seen.

Lieutenant Hanns Alexander is one of the lead investigators, Rudolf Höss his most elusive target. In this book, Thomas Harding reveals for the very first time the full, exhilarating account of Höss' capture. Moving from the First World War to bohemian Berlin in the 1920s, to the horror of the concentration camps and the trials in Belsen and Nuremberg, it tells the story of two German men whose lives diverged, and intersected, in an astonishing way.

“A chilling portrait of the banality of evil” (Ben Macintyre, The Times Books of the Year)
“[an] extraordinary story...The tale of how he then doggedly tracked down Rudolf Hőss, the merciless commandant of Auschwitz is stunning - not just because it is so gripping, but because Harding interweaves Hanns’ life story fascinatingly with Hőss's... A compelling, remarkable picture of war and its aftermath.” ( The Sunday Times Books of the Year)
“Harding sketches the parallel lives of the SS officer with notable skill. The book is a moving reminder of what an extraordinary amount Britain gained by the Jewish flight from Europe in the 1930s.” (Max Hastings, Guardian Books of the Year)
“Hanns and Rudolf tells the mesmeric tale of his uncle's hunt for an arch perpetrator of the Jewish Holocaust.” (John le Carré, Telegraph Books of the Year)
“This superlative look at two men - one, Rudolf Höss, the Kommandant of Auschwitz; the other, Hanns Alexander, the man who arrested him - makes for uncomfortable, but essential reading.” (Stuart Evers, Netgalley Books of the Year)
“The detective story approach worked well in Thomas Harding's Hanns and Rudolf” (Ben Shephard, Observer History Books of the Year)
“An unexpected delight... It is amazingly well researched, resists judgement, and above all is an utterly compelling read.” (David Shrigley, New Statesman Books of the Year)

Das sagen andere Hörer zu Hanns and Rudolf: The German Jew and the Hunt for the Kommandant of Auschwitz