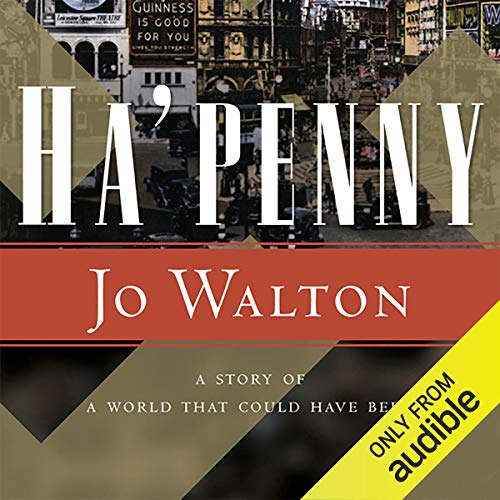 In 1949, eight years after the "Peace with Honor" was negotiated between Great Britain and Nazi Germany by the Farthing Set, England has completed its slide into fascist dicatorship. Then a bomb explodes in a London suburb. The brilliant but politically compromised Inspector Carmichael of Scotland Yard is assigned the case. What he finds leads him to a conspiracy of peers and communists, of staunch king-and-country patriots and hardened IRA gunmen, to murder Britain's prime minister and his new ally, Adolf Hitler.

Against a background of increasing domestic espionage and the suppression of Jews and homosexuals, an ad-hoc band of idealists and conservatives blackmail the one person they need to complete their plot, an actress who lives for her art and holds the key to the fuhrer's death. From the ha'penny seats in the theatre to the ha'pennies that cover dead men's eyes, the conspiracy and the investigation swirl around one another, spinning beyond anyone's control.

In this brilliant companion to Farthing, Welsh-born World Fantasy Award-winner Jo Walton continues her alternate history of an England that could have been with a novel that is both an homage of the classic detective novels of the 30s and 40s and an allegory of the world we live in today.

"World Fantasy Award-winner Walton masterfully illustrates how fear can overwhelm common sense, while leaving hope for a resurgence of popular bravery and an end to dictatorial rule." (Publishers Weekly)