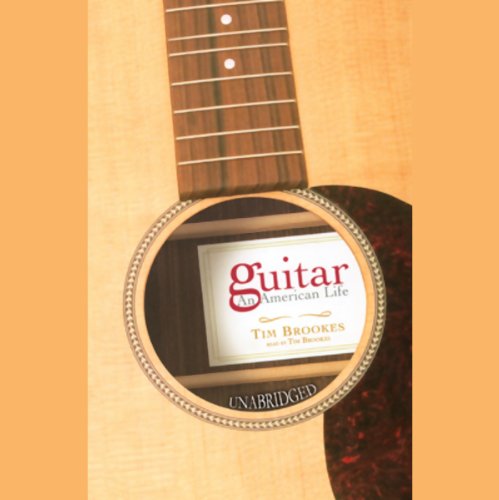 What was it about a small, humble folk instrument that allowed it to become an American icon? The guitar represents freedom, the open road, protest and rebellion, the blues, youth, lost love, and sexuality. Tim Brookes explores with adoration these ideas and how they became entwined with the history of America.

Shortly before Tim Brookes' 50th birthday, baggage handlers destroyed his guitar, his 22-year-old traveling companion. His wife promised to replace it with the guitar of his dreams, but Tim discovered that a dream guitar is built, not bought. He set out to find someone to make him the perfect guitar, a quest that ended up a on a dirt road in the Green Mountains of Vermont, where an amiable curmudgeon master guitarmaker, Rick Davis, took a rare piece of cherry wood and went to work with saws and rasps.

Meanwhile, Tim set out to write a kind of chronicle of the guitar, as he said, "not a catalog of makes and models, nor a genealogy of celebrities, but an attempt to understand this curious relationship between the instrument and the people involved with it, and how that has grown and changed over time".

He discovered that the instrument, first arriving with conquistadors and the colonists, ended up in the hands of a variety of people: miners and society ladies, lumberjacks and presidents' wives, Hawaiians, African-Americans, Cajuns, jazz players, spiritualists, singing cowboys of the silver screen, and bluegrass and Beatles fans. Inventors and crackpots tinkered with it. In time, it became America's instrument, its soundtrack.

When Tim wasn't breathing over Rick's shoulder, he was trying to unravel the symbolic associations a guitar holds for so many of us, musicians and non-musicians alike. His journey takes him across the country talking to historians, curators, and guitarmakers.