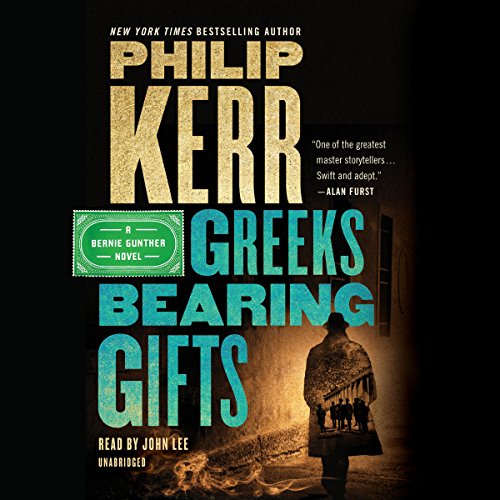 An NPR book of the year

Munich, 1956. Bernie Gunther has a new name, a chip on his shoulder, and a dead-end career when an old friend arrives to repay a debt and encourages "Christoph Ganz" to take a job as a claims adjuster in a major German insurance company with a client in Athens, Greece.

Under the cover of his new identity, Bernie begins to investigate a claim by Siegfried Witzel, a brutish former Wehrmacht soldier who served in Greece during the war. Witzel's claimed losses are large, and, even worse, they may be the stolen spoils of Greek Jews deported to Auschwitz. But when Bernie tries to confront Witzel, he finds that someone else has gotten to him first, leaving a corpse in his place.

Enter Lieutenant Leventis, who recognizes in this case the highly grotesque style of a killer he investigated during the height of the war. Back then, a young Leventis suspected an S.S. officer whose connection to the German government made him untouchable. He's kept that man's name in his memory all these years, waiting for his second chance at justice...

Working together, Leventis and Bernie hope to put their cases - new and old - to bed. But there's a much more sinister truth to acknowledge: A killer has returned to Athens...one who may have never left.

"Adding an arch tone to his delivery, narrator John Lee provides an extra layer of listening pleasure to the thirteenth installment of the adventures of Bernie Gunther... Lee handles the accents and colorful characters, as well as Bernie's observations and the shifts in pacing, with steady hands.... Lee and Kerr combine their storytelling talents to make this visit to the dark streets and alleys of Berlin bone chilling and emotionally satisfying." (AudioFile)

"A terrifically complex tale...a beautifully written novel by a gifted writer who has left us too soon." (Washington Post)

“It doesn't take much to get swept into Gunther's latest adventure or taken in by his darkly witty commentary.” (Chicago Tribune)