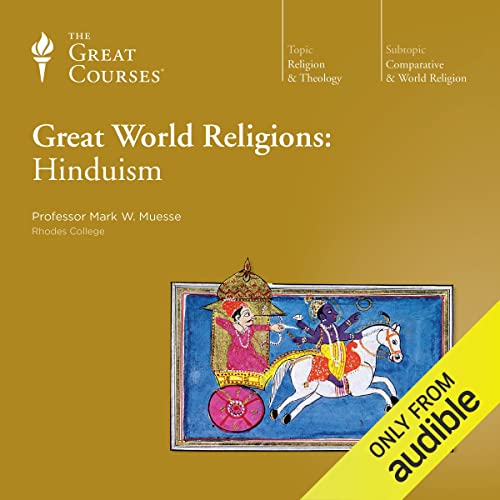 In this 12-lecture series, you'll encounter a religion that is perhaps the most diverse of all; one that worships more gods and goddesses than any other, and one that rejects the notion that there is only one path to the divine. These lectures provide a window into the roots of, perhaps, all religions. You'll explore over the course of Hinduism's 5,000-year journey: the Indus Valley civilization; the sizable variety of Hindu gods and goddess; the sacred writings in the Vedas, Bhagavad Gita, and Upanishads; Hindu ritual purity rites; the Aryan language of Sanskrit, whose roots can be seen in English words such as "divine," "video," and "ignite"; and much more.

The story of Hinduism, you'll come to see, is the story of very non-Western traditions (such as arranged marriages and the caste system) that have survived and thrived for thousands of years. It's also home to a wealth of gods, terms, and practices (such as karma, Krishna, yoga, and guru) that have found a home in Western lives and language. Along the way, Dr. Muesse discusses salient aspects of Hindu life and places them in historical and theological context. He also explains that Hinduism honors all seekers of truth, that it contains multiple paths to divine reality (the way of action, the way of wisdom, and the way of devotion), and that it can be both a monotheistic and a polytheistic faith.

Bad lecturer for an audio book.

Of course I am aware that a lecture is not the same as an audio book, but the speaker has rather supported my sleep than making me excited about Hinduism. Every sentence sound exactly the same. But most of all, he cannot even pronounce the Hindi terms he uses in a correct way.