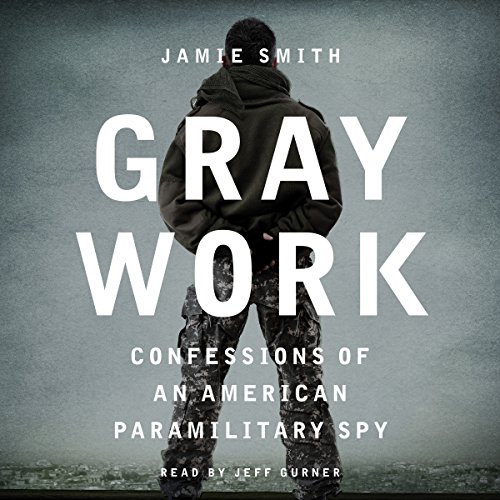 In this unprecedented audiobook, a paramilitary contractor with more than two decades of experience gives us a firsthand look into the secret lives of America's private warriors and their highly covert work around the world. Author Jamie Smith has planned and executed hundreds of missions on behalf of government agencies and private industry in some of the world's most dangerous hot spots - and lived to tell the tale.

They are elite warriors who run highly dangerous missions deep inside foreign countries on the brink of war. Jamie Smith knows these men well. Not only is he one of them, but he was the founding director of one of the most successful global, private military contracting firms. For the first time, he breaks his silence, pulling back the curtain to reveal in raw, intimate terms exactly what paramilitary spies and operators like him do when the government cannot act or take public responsibility.

Combining the thrilling narrative of an international spy thriller with bracing boots-on-the-ground realism, Gray Work follows Smith through grinding CIA training and his career as an operative, his work with Blackwater Security, and the creation of his own successful company. Here is the grit and gristle of modern warfare, from espionage and assassinations, rescues and renditions; from the dark corners of the Arab Spring and the fall of Qadhafi to black ops; from Syria to Libya, Iraq, Afghanistan, Pakistan, Iran, and beyond. Smith has fought terrorists and won; he was ambushed on a mission in Pakistan and took a bullet through his shoulder and to his back and subsequently survived a grueling mountain trek that almost cost him his life.

As founding director of Blackwater Security and then as head of his own company, Smith has helped shape a decade of war. His book powerfully illustrates how the men who serve in this gray area between the public and private worlds are transforming the art and science of modern warfare.

After I had purchased and listened to this book I searched the internet for information about the author. Well, there's plenty: he has been exposed as a world-class Walter Mitty, even worse, a fraud who has cheated an elderly couple out of their retirement money. That said, since the story is excellently read by Jeff Gurner, you still might enjoy it as fiction...