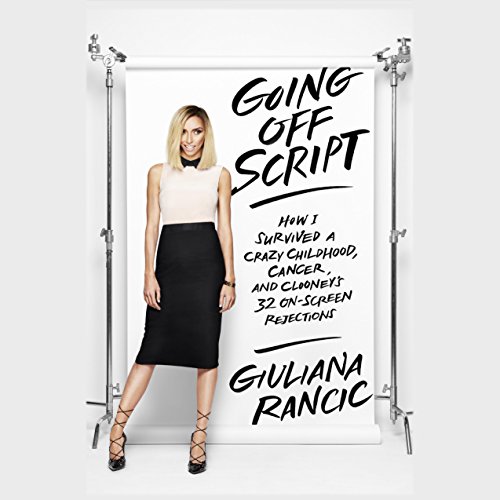 Giuliana Rancic is best known for interviewing A-listers on the red carpet and E! News, skewering their shocking style choices on Fashion Police, and giving viewers a front-row seat to her marriage and family life on her reality show, Giuliana & Bill. What fans may not know is that she learned English from Eddie Murphy, got her American citizenship so she could be a beauty queen, and used to have a bad habit of stealing cars for fun.

Giuliana bares this and so much more in her hilarious, warm, and inspiring memoir, Going off Script. From a young age she dreamed of being a TV anchorwoman, but because of her inclination toward mischief and away from schoolwork, her path to her dream job was far from straight. After a fateful (and mortifying) encounter with the late Senator Ted Kennedy, she learned that Hollywood news was where she belonged. Thankfully for listeners, this epiphany led her to a bounty of LA misadventures (featuring notables such as Johnny Depp, Leonardo DiCaprio, and Russell Crowe) and an entertaining behind-the-scenes perspective on what our favorite celebrities are really like.

In spite of her glamorous Hollywood life, however, Giuliana could not escape some rockier times, including her battles with infertility and breast cancer. Here, for the first time, she reveals the whole truth behind her well-publicized struggles and the highly controversial decisions she had to make. And, of course, at the heart of it all are the two loves of her life who keep her strong through everything: her husband, Bill, and her son, Duke.

Candid, funny, and poignant, Going off Script is an autobiography that proves you don't always have to follow the rules to get the life you've always dreamed of.