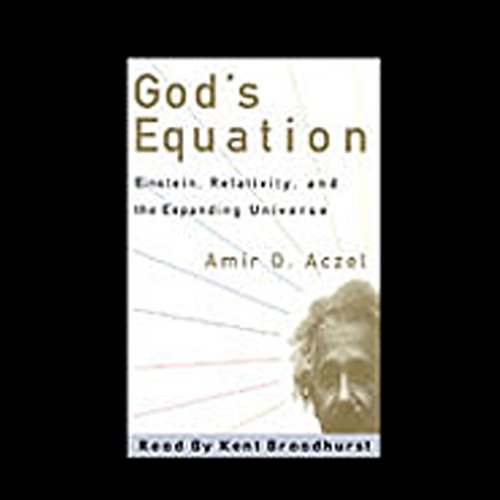 Are we on the verge of solving the riddle of creation using Einstein's "greatest blunder"?

In a work that is at once lucid, exhilarating and profound, renowned mathematician Dr. Amir Aczel, critically acclaimed author of Fermat's Last Theorem, takes us into the heart of science's greatest mystery. In January 1998, astronomers found evidence that the cosmos is expanding at an ever-increasing rate.

The way we perceive the universe was changed forever. The most compelling theory cosmologists could find to explain this phenomenon was Einstein's cosmological constant, a theory he conceived - and rejected - over 80 years ago.

Drawing on newly discovered letters of Einstein - many translated here for the first time - years of research, and interviews with prominent mathematicians, cosmologists, physicists, and astronomers, Aczel takes us on a fascinating journey into "the strange geometry of space-time," and into the mind of a genius.

Here the unthinkable becomes real: an infinite, ever-expanding, ever-accelerating universe whose only absolute is the speed of light. Awesome in scope, thrilling in detail, God's Equation is storytelling at its finest.

Amir Aczel made higher mathematics intelligible to us in his groundbreaking Fermat's Last Theorem. Now, he does the same in a book of truly awesome scope: God's Equation.