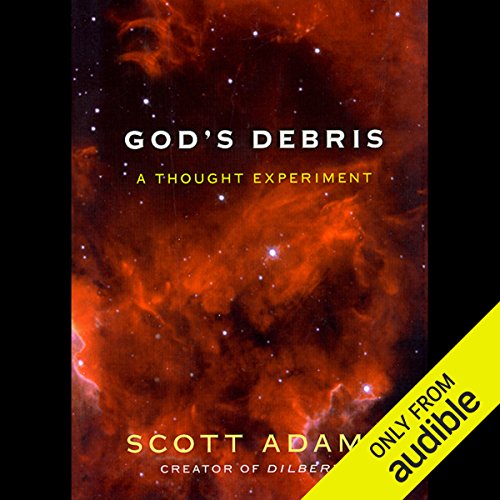 God's Debris isn't a conventional book. It is written on three separate levels, by Scott Adams, better known as the creator of the Dilbert comic. What is less known about Adams is that he's a trained hypnotist. God's Debris is what happens when creativity and hypnosis intersect. On the surface, God's Debris is a simple fictional story of a delivery man who encounters an Avatar who knows literally everything. The Avatar reveals the truth about God, reality, science, probability, human perception, and even social success. Adams uses a writing trick to make the Avatar's answers appear more persuasive than they should be. The second level of the book involves arguing with your friends about what parts the Avatar got wrong. Some of what the Avatar says is consistent with science, and some of it is pure fiction. See if you can tell which is which. You and your friends will come to very different conclusions.The third level of the book is the most provocative, but it won't have the same effect on all listeners. The story is designed as a very subtle hypnotic induction, with the intent of giving some (but not all) readers the sensation that the Avatar's words actually contain the wisdom of the universe.

For some readers, especially those under 30, God's Debris can be a mind altering experience. Fair Warning: Because of the hypnotic writing style, readers tend to have strong reactions to the work. If you are in the top 5% of the population in terms of scientific knowledge, or philosophical reading, there's a good chance you will have an angry reaction to God's Debris. But if you are more of a seeker than a know-it-all, your experience could be something special.