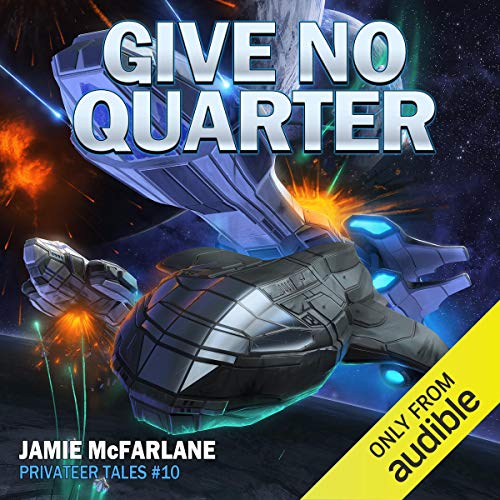 Branded criminals and on the run from the most powerful corporation in the known universe, Liam Hoffen and the crew of Hotspur have a simple choice to make. They can either cower and hide on the long since abandoned planet Ophir, or continue their mission to set right the wrongs perpetrated by a company willing to trade human suffering and lives for their bottom line. If you've followed their story, you know which choice they'll make.

Our crew will discover new planets and alien species. They'll fight pitched fleet battles and struggle against a deadly new alien foe, which is as cunning as it is ruthless. While fighting a war on two fronts, Hoffen is ambushed by his father's murders. This showdown comes at the worst possible time and forces him to fight for everyone he loves. In the end, only he or the enemy will exit the field of battle and no quarter will be given.

Give No Quarter is the 10th book in the Privateer Tales universe and is the third in the Belirand Menace story arc, which started with Buccaneers and is followed by A Matter of Honor.