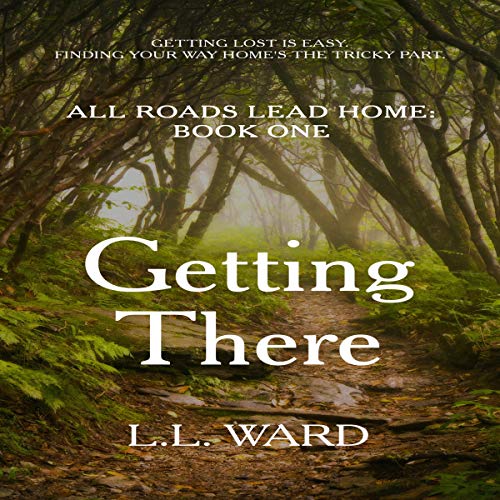 The old man dropped his smirk and stared at the cowboy for a long spell. He got up, walked over to a shelf and took down a bottle Jesse hadn't noticed before. The old man walked over to him and poured some of it in the open spot on his head. "That's just plain sad, son," he said. "I finally met a man more pitiful than me."

Getting lost is easy. Finding your way home's the tricky part. The struggle for survival can get messy, and that's for those who care. It gets downright ugly for those who don't.

Enter now into Jesse's journey of last resort, pressed onward by an unknown force driving him back to the very ground he'd cursed before leaving 10 years prior. Jesse crosses paths with a curious character who is thought to be an assassin named Maxwell Calkinmyer, receives a partially shot off ear compliments of Crazy Mary, and is shaken silly by a curmudgeon by the name of Levon.

Getting There, the first book in the All Roads Lead Home saga, reveals Jesse's rich Scot-Wichita heritage as he treks up north to Wyoming in order to winter. Not by choice. He'd just flat run out of places that would take him. Along the way, he travels back in time to his roots, where his Native American grandmother's tales span over 80 years across pre-Indian Territory, linking his past, present, and future generations.

Time may not heal all wounds, Jesse will learn. It will, however, do its part when we at least show up for our part. Getting There is an up and down, emotion-yanking, laugh-triggering, thought-provoking tale of betrayal, mystery, suspense, action, and adventure with more twists than a secondhand bread tie.

L. L. Ward, a prodigal native Oklahoman, takes you for a ride beginning in the early 1800s and brings it on home to present day through the course of the seven-book All Roads Lead Home series.