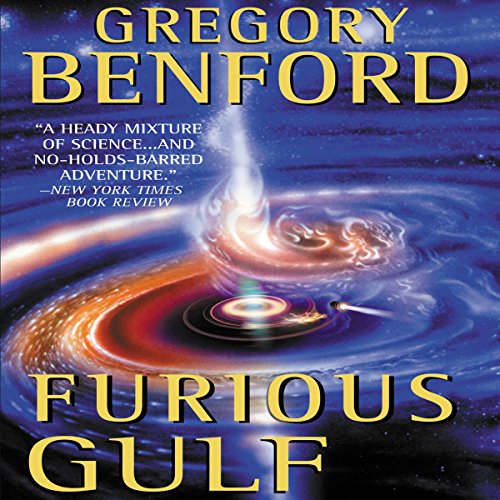 Few writers have successful blended hard science and speculation with fully realized characters as Gregory Benford has in his critically acclaimed novels. Now he draws us into a vortex of mystery and danger at the heart of the galaxy in his dazzling epic drama, Furious Gulf.

Containing the remnants of humanity from the planet Snowglade, the spaceship Argo hurtles toward its uncertain destiny, the bold and brilliant Captain Killeen at its helm. But he has grown increasingly isolated and anguished in command. The ship’s gardens are failing, its voyagers face starvation, and there are dark whispers within, talk of mutiny. Killeen’s will, however, remains as strong as ever, his determination to reach the True Center of the galaxy bordering on obsession.

Amid a mad swirl of incandescent suns and ghostly blue clouds of galactic dust, beset by hostile worlds controlled by the mechs – a vast and violent artificial intelligence whose only meaning, only mission, is the complete extermination of the human race - Killeen pursues his desperate search, convinced his people’s one hope of survival lies in the True Center. The crew has followed him this far on faith, a faith now being tested to the limit. Even his own son Toby, groomed for leadership, is beginning to question his father’s command.

As the Argo undertakes a perilous quest into the unknown, Toby faces his own journey into the mysteries of adulthood. Like the others in this Family of voyagers, Toby’s spine contains microchip implants holding the memories – the legacy – of his race. But just as the technology designed to save his people may tear Toby himself apart, so his father’s desperate gamble to save the Argo may plunge the ship and its inhabitants into a cosmic pit of all-consuming fire.

In this extraordinary novel, part of an interconnected series of novels that began with In the Ocean of Night and continued in Across the Sea of Suns, Great Sky River, and Tides of Light, Gregory Benford explores the fundamental nature of human development and discovery. Across the gulf that stretches between fear and faith, past and future, we watch in wonder as an age-old question continues…the quest for the fulfillment of an individual, for the evolution of a species, for the immortality of the soul.