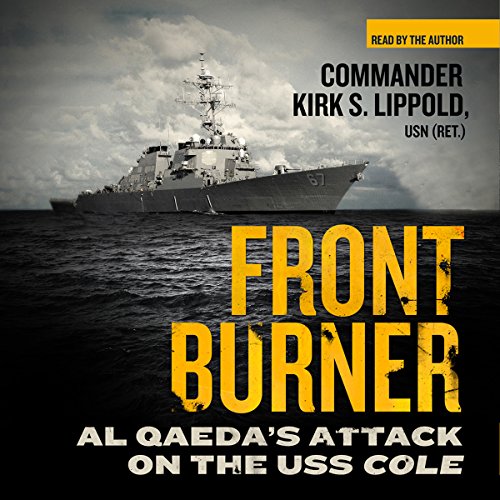 On October 12, 2000, at 11:18 a.m., an 8,400-ton destroyer, the USS Cole, was rocked by an enormous explosion. The ship’s commander, Kirk Lippold, watched as tiles tumbled from the ceiling, mugs of coffee tumbled to the floor, and everything not bolted down seemed to float in midair. Lippold knew in a matter of moments that the Cole had been attacked. What he didn’t know was how much the world was changing around him.

Eleven months later, he was debriefed by the CIA and told about Osama bin Laden. By some unbelievable coincidence, that meeting occurred on the morning of September 11, 2001. In a scene that seems almost tailor-made for movie treatment, at the end of this early morning meeting about the looming threat of al-Qaeda, Kirk remarked, “I don’t think America understands. I believe it is going to take a seminal event, probably in this country, where hundreds, if not thousands, are going to have to die before Americans realize that we’re at war with this guy.” Mere moments later, the first plane struck the World Trade Center. The CIA agent who had debriefed him said, “Kirk, I can’t believe you said what you did this morning.”

The truth is that it wasn’t so unbelievable: Lippold had known for 11 months longer than the rest of the nation that al-Qaeda was at war with America. His story has remained untold—until now.

In this thrilling first-person narrative, Lippold reveals the details of his harrowing experience leading a crew of valiant sailors through the deadliest attack on an American vessel since 1987. He also explains how this event was overshadowed by 9/11, swept under the rug by bureaucrats and political operatives, who eventually attempted to lay blame for the attack on Lippold himself, denying him promotion and halting his career.

An essential volume that belongs side by side with The Looming Tower, Ghost Wars, and The 9/11 Commission Report, this book restores a crucial story that has until now been lost in the fog of the war on terror.

Commander Kirk S. Lippold, USN (Ret.), was the commanding officer of the USS Cole when it was attacked by al Qaeda in the port of Aden, Yemen, in October 2000. He and his crew distinguished themselves in the aftermath of that attack by saving the ship, which remains in service today. He received numerous military awards and retired from the Navy in 2007.

“This book and the story of the men and women that it recounts is an inspiration.” (William J. Perry, former US Secretary of Defense)
“Lippold delivers a personal, opinionated account of the last outrage before 9/11, which should have galvanized our leaders but didn’t.” ( Kirkus Reviews)