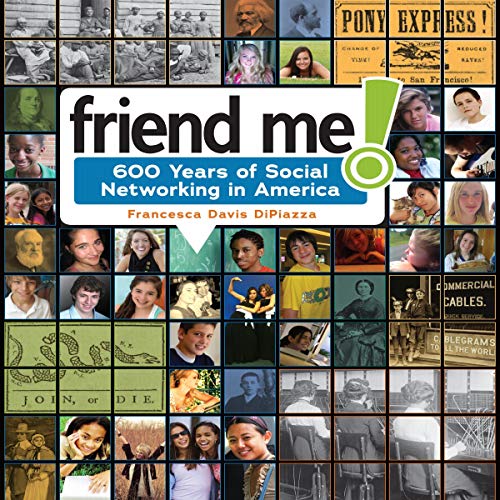 Anyone who texts recognizes "LOL", "2G2BT", and "PRW" as shorthand for "laughing out loud", "too good to be true", and "parents are watching". But did you know that in the 1800s - when your great-great-great-grandparents were alive - telegraph operators used similar abbreviations in telegrams? For example, "GM", "SFD", and "GA" meant "good morning", "stop for dinner", and "go ahead". At the time, telegrams were a new and superfast way for people to network with others.

Social networking isn't a new idea. People have been connecting in different versions of circles and lists and groups for centuries. The broad range of social media includes wampum belts, printed broadsides (early newspapers), ring shouts (secret slave gatherings with singing and dancing), calling cards, telegrams, and telephones. The invention of the internet - and email, text messaging, and social utilities such as Facebook and Google+ - is just the latest way in which humans network for fun, work, romance, spiritual bonding, and many other reasons.

Friend Me! takes listeners through the amazing history of social networking in the United States, from early Native American councils to California's Allen Telescope Array (ATA), where researchers are hoping to interact with extraterrestrial beings. Learn how Americans have been connecting in imaginative ways throughout history, and you'll see social networking in a whole new light.

Please note: The original source audio for this production includes noise/volume issues. This is the best available audio from the publisher.

"Q: What do Ute carvings, corn-husking parties, and telegraph machines have in common? A: They are all early forms of social networking, discussed in Friend Me! DiPiazza takes a look at various historical forms of social networking throughout history and discusses the fact that our desire to communicate with and be in social groups is not new; we just go about it differently. Topics discussed include uniting the Native American nations, creating community in the context of slavery, and various forms of technology that have led to tremendous leaps in social networking. DiPiazza does a good job of tying his theme together and making transitions from one concept to the next. For example, telegraph operators used abbreviations in their telegrams that are similar to the text-messaging shortcuts used today. Friend Me! contains black-and-white pictures with a soft blue text bubble to provide additional information. There are plenty of pictures to illustrate what the author is saying and help reinforce the message.
Friend Me! takes a popular topic in the lives of teens and uses it to explore history in unique ways. This book provides information on a wide variety of topics and could be used to supplement research on some of the other topics mentioned, as well as the idea of social networking. This book is informative, interesting, and socially relevant - you will want to add this to your collection." (VOYA)

"From early Native American cultures to present-day scientists hoping to interact with possible extraterrestrial beings, people continue to reach out to others for a variety of purposes. Black-and-white photographs and diagrams combine with sidebars and a well-researched text to present the history and future of social networking and the means employed to connect with individuals and groups." (The Horn Book)

"The catchy title makes this appear to be about the recent phenomena of electronic social networks. However, the subtitle is a clue that the scope includes so much more. The whole scope of the American history of socializing is covered, beginning with the Iroquois and their method of weaving beads into wampum belts. Early religious groups, colonial coffeehouses, broadsides, secret gatherings of slaves, circuit riders, telegraphs, mail orders, and groups such as the YMCA and NAACP are profiled as examples of social networking. Today's online communities (Facebook, Twitter, blogs, e-mail, etc.) are touched upon with the supposition that face-to-face socializing is still important. The solid information will make this useful for reports, while the pleasing design set off by touches of blue, as well as the sufficient black-and-white archival photos placed throughout, make this plenty appealing for browsers." (Booklist)