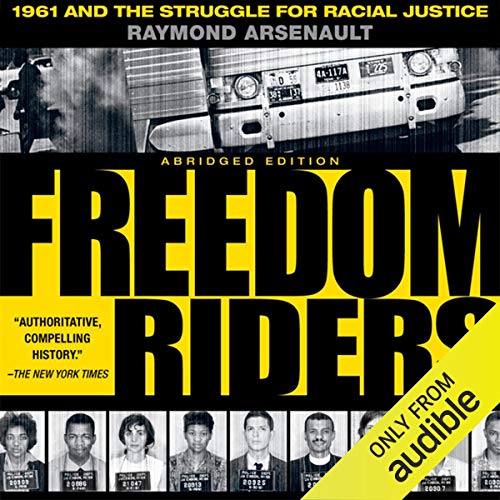 If you didn’t pay attention in 10th grade history, here’s your second chance to learn about one of the most pivotal events in the Civil Rights movement — but you won’t have the urge to fall asleep in narrator Mirron Willis’ class. Raymond Arsenault’s detailed and chronological account of the Freedom Rides of 1961 begins in 1948 with the story of Irene Morgan, a black woman who boarded a bus in Virginia and sat in the only empty seat, which happened to be in front of a white couple — and against the law. She refused to move when asked by the bus driver and set the wheels in motion for a critical case that climbed all the way to the Supreme Court and made segregated interstate travel illegal. Little known, but crucial facts like these lay the foundation for what led a group of 450 interracial people to ride a bus through some of the most violent and racist cities in the Jim Crow South for six months in 1961.

Mirron Willis, with a powerful James Earl Jones-esque voice, expertly narrates the hard facts, yet still conveys the mix of fear, passion, and determination of the cast of riders committed to a worthy cause. His strong enunciation is appropriately like that of a history professor — you can almost picture him lecturing in front of a room of rapt students — and it’s a lesson you won’t soon forget. His commanding oration combined with the vivid details of the harrowing journey, the violence the group encountered, and their unwavering strength in the face of adversity paint such a clear picture that it’s almost as if you’re watching a movie.

If you’re looking for a book with strong lead characters and loads of suspense, where the good guys win in the end, Freedom Riders won’t disappoint. And it’s even more memorable and astounding, because it’s true. —Colleen Oakley

The saga of the Freedom Riders is an improbable, almost unbelievable story. In the course of six months in 1961, 450 Freedom Riders expanded the realm of the possible in American politics, redefining the limits of dissent and setting the stage for the civil rights movement.

In this new version of his encyclopedic Freedom Riders, Raymond Arsenault offers a significantly condensed and tautly written account. With characters and plot lines rivaling those of the most imaginative fiction, this is a tale of heroic sacrifice and unexpected triumph. Arsenault recounts how a group of volunteers - blacks and whites - came together to travel from Washington, DC, through the Deep South, defying Jim Crow laws in buses and terminals and putting their lives on the line for racial justice. News photographers captured the violence in Montgomery, shocking the nation and sparking a crisis in the Kennedy administration.

Here are the key players - their fears and courage, their determination and second thoughts, and the agonizing choices they faced as they took on Jim Crow - and triumphed. Winner of the Owsley Prize, this publication is timed to coincide with the airing of the American Experience miniseries documenting the Freedom Rides.