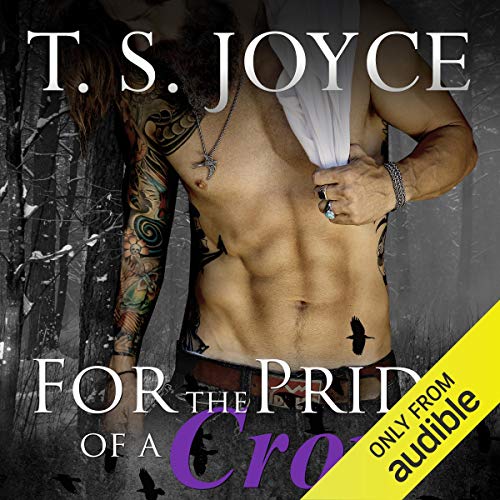 For the Pride of a Crow

Ethan Blackwood has a dark destiny that will make him the next Blackwood Crow. He’s being haunted by his past and is slowly morphing into the man he never wanted to be. Every decision he’s made to get to this point in his life has been a misstep, and he’s desperate to get turned in the right direction before it’s too late. He doesn’t know how, until he runs into a clumsy little beauty who has decided he is hers, and she is his. What he needs to do is stay steady and figure out a way to get rid of the ghost from his past, but Leah is making it hard to think straight. But the closer she gets to him, the more danger she’s in, because the ghost from his past will do anything to keep Ethan’s destiny intact - even hurt the girl he’s falling for.

Leah Hawthorne isn’t great at many things, but she can tell when a man is good or bad, and Ethan Blackwood is a bad boy with a heart of gold. He’s crazy. Everyone in town knows that much. He talks to himself too much to be sane, but she’s up for being his friend. And the more she gets to know him, the more she thinks he might just be the man to handle her quirks. But he’s a slippery little fish and hard to catch, and now she’s thinking he isn’t as crazy as everyone thinks. Choosing him means putting her life in peril, and there is no doubt her future will be changed forever, but maybe that’s just what this bored, small-town girl needs...a little danger and a lot of love for one hot-as-hell, Harley-riding outlaw Blackwood Crow.

Das sagen andere Hörer zu For the Pride of a Crow