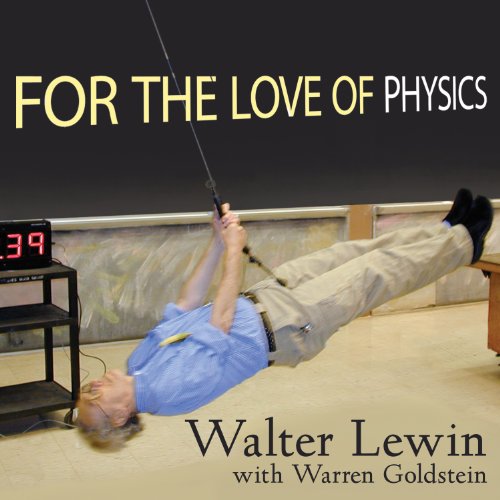 For the Love of Physics

"You have changed my life" is a common refrain in the emails Walter Lewin receives daily from fans who have been enthralled by his world-famous video lectures about the wonders of physics. "I walk with a new spring in my step and I look at life through physics-colored eyes," wrote one such fan. When Lewin's lectures were made available online, he became an instant YouTube celebrity, and the New York Times declared, "Walter Lewin delivers his lectures with the panache of Julia Child bringing French cooking to amateurs and the zany theatricality of YouTube's greatest hits."

For more than 30 years as a beloved professor at the Massachusetts Institute of Technology, Lewin honed his singular craft of making physics not only accessible but truly fun, whether putting his head in the path of a wrecking ball, supercharging himself with 300,000 volts of electricity, or demonstrating why the sky is blue and why clouds are white.

Now, as Carl Sagan did for astronomy and Brian Green did for cosmology, Lewin takes listeners on a marvelous journey in For the Love of Physics, opening our eyes as never before to the amazing beauty and power with which physics can reveal the hidden workings of the world all around us. "I introduce people to their own world," writes Lewin, "the world they live in and are familiar with but don't approach like a physicist - yet."

Could it be true that we are shorter standing up than lying down? Why can we snorkel no deeper than about one foot below the surface? Why are the colors of a rainbow always in the same order, and would it be possible to put our hand out and touch one? Whether introducing why the air smells so fresh after a lightning storm, why we briefly lose (and gain) weight when we ride in an elevator, or what the Big Bang would have sounded like had anyone existed to hear it, Lewin never ceases to surprise and delight with the extraordinary ability of physics to answer even the most elusive questions.

"As joyful as Richard Feynman's Lectures in Physics (but without the math), this text (written with the aid of University of Hartford historian Goldstein) glows with energy and should please a wide range of readers." ( Publishers Weekly)

Das sagen andere Hörer zu For the Love of Physics

Not what i expected!

First off its not a bad book. but it has one major problem! its got almost nothing to do with physics. Walter Lewin is a very sympathetic man who has no doubt left his mark in the world of physics and education but this book has unfortunately nothing to do with either! its more a collection of his thoughts and past expieriencenses in this field. in chapter 12 he points out (and this is something i struggle with alot as i was not fortunate enough to study at MIT or similar) that physics sounds to us normal people more like science fiction than fact. but then he makes the same mistake! and he even says that it is because physisists dont explain things. everytime he gets close to explaining something that is at a higher level than high school physics comes the comment "but thats very technical and i wont get into that right now" i watched his last lecture on Youtube and when ever a question is asked he replys "buy my book its all explained there" when really this book does nothing of the sort. i found nothing new and had no new insights to anything that you wouldnt already know if you are "just" slightly interested in physics. all in all interresting to listen to if you dont mind listening to thing that you (probably) already know!

A very good book for beginners. The first chapters are well written but very, very basic.. The last chapters on astronomy are the most interesting.