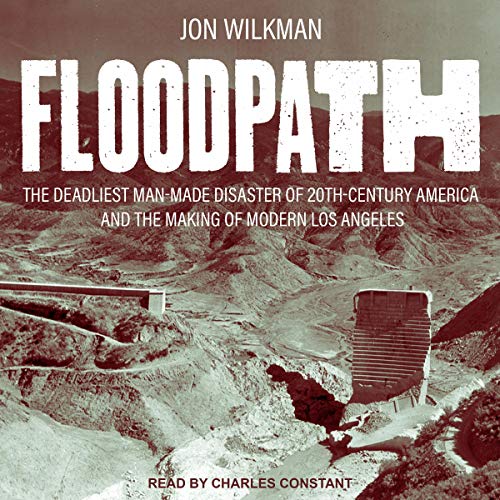 Just before midnight on March 12, 1928, the St. Francis Dam, a 20-story-high concrete structure just fifty miles north of Los Angeles, suddenly collapsed, releasing a devastating flood that roared 54 miles to the Pacific Ocean, destroying everything in its path. It was a horrific catastrophe, yet one which today is virtually forgotten.

With research gathered over more than two decades, award-winning writer and filmmaker Jon Wilkman revisits the deluge that claimed nearly five hundred lives. A key figure is William Mulholland, the self-taught engineer who created an unprecedented water system, allowing Los Angeles to become America's second largest city, and who was also responsible for the design and construction of the St. Francis Dam.

Driven by eyewitness accounts and combining urban history with a life-and-death drama and a technological detective story, Floodpath grippingly reanimates the reality behind LA noir fictions like the classic film Chinatown. In an era of climate change, increasing demand on water resources, and a neglected American infrastructure, the tragedy of the St. Francis Dam has never been more relevant.