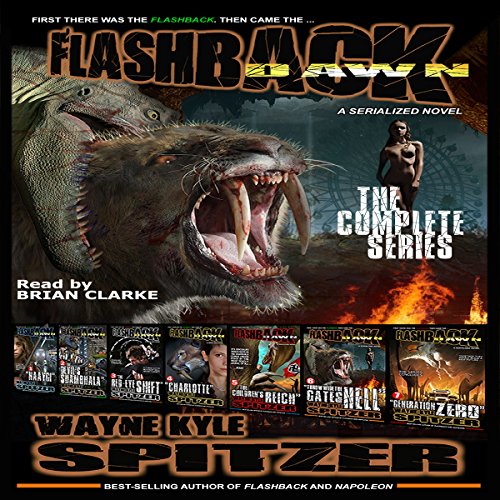 The complete sequel series to Flashback.

Naaygi found them waiting for her - as she somehow knew they would be - as the cage doors opened, their forward-facing eyes glinting the same hue as the lights in the sky and their dark, storm-colored bodies held absolutely still (even as another animal joined them and brought their number to four). She even knew somehow what they were, that they were a breed of carnosaur the "evolved" humans had called nanotyrannosaurs, the "Pygmy Tyrants", and that one of them, the one with the brand upon its tail, the leader, even had a name - Napoleon, for he had been bounced forward and back in time via another alien species well before the Flashback and still bore the scars of his sojourn among the humans. She didn’t know how she knew these things, no more than she knew just where, within herself, Naaygi ended - and they, the lights in the sky, began. She just did, just as she knew that the Nano-Ts represented a queer offshoot of the dinosaur population that was altogether fleeter and deadlier and cannier than anything that had come before it.

And thus she bowed to them, her avengers, her killers - their killers, the lights in the sky - the rain running in rivulets down her body as she dropped to her knees and touched her forehead to the pavement, a pavement which ran red with blood and was strewn with the dismembered, disemboweled corpses of at least 50 men and women.

And then she whispered to them in a language older than words, Follow me.