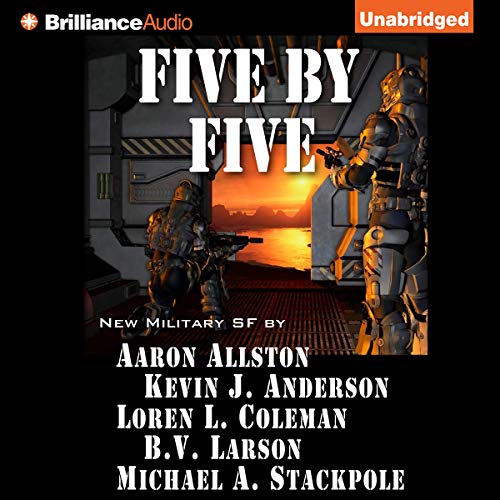 It’s a war out there. In these pulse-pounding tales, the best (or worst) soldiers in the galaxy are pitted against powerful aliens on distant battlefields. Never-before-published stories about monsters, deadly combat tech, treachery, and honor:

"Big Plush" by Aaron Allston (a novella from the Action Figures series) - The Dollgangers, artificial people made in mankind's image, take up arms in a desperate bid to win their freedom.

"Comrades in Arms" by Kevin J. Anderson - A damaged cyborg soldier and an enemy alien fighter turn their backs on the war and try to escape. But the human and alien governments can't tolerate the two deserters working together, so they join forces to hunt them down.

"Shores of the Infinite" by Loren L. Coleman (a novella from the ICAS File series) - Separated from command & control, Combat Assault Suit troopers force a beachhead to liberate a new planet from the cyborg threat.

"The Black Ship" by B.V. Larson (a mech novella from the Imperium Series) - A human settlement on the deadliest planet ever colonized clings to life...but today new invaders are coming down from the stars.

"Out There" by Michael A. Stackpole - The Qian have discovered humanity and welcomed them into their star-spanning empire. The benefits they offer humanity are many, and they don't want much in return: just the best human pilots available to take apart a most diabolical enemy.