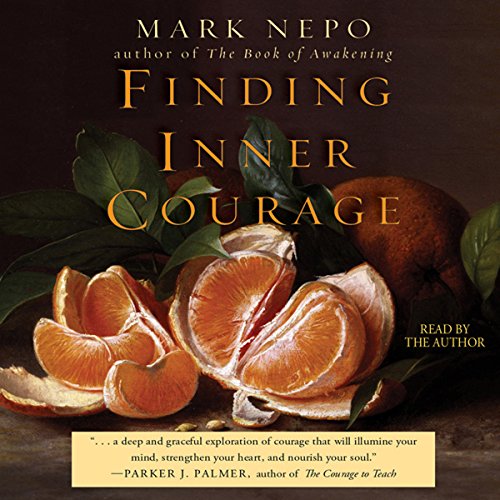 Mark Nepo’s choice to read his own work is particularly effective here, as the book contains deeply personal details about his own struggles to stay true to himself through adversity, and his narration really brings those struggles to life. His fourth nonfiction book may be labeled self-help, but it’s also part poetry, part philosophy, and part collection of moving parables  from folk legends to stories from Nepo’s own past. His kind-sounding voice adds a compelling note to his argument for living with an open and accepting spirit, but hearing him explain the reasoning behind this argument by drawing from his own experience adds richness to the book that no other narrator could have achieved. Nepo’s beautiful, simple story of getting over his lifelong fear of dogs by adopting a golden retriever is easily the book’s most effective guide to finding inner courage. He also shares anecdotes from the lives of Rosa Parks, Nelson Mandela, Alexandr Solzhenitsyn, and many other famously courageous people, but it is when he turns to defining courage with stories from his own life that his narration reaches remarkable poignancy.

After Nepo beat cancer more than two decades ago, he was compelled to share his first-hand knowledge of the necessity of acceptance and surrender in the face of life’s challenges. In Finding Inner Courage, Nepo attempts to connect his philosophy in the face of adversity to the definition of courage. In his view, acceptance and surrender don’t mean “giving up”, but “standing by one’s core”, even in the face of fear. The warmth and welcome in his voice convey the inner strength he has developed over a lifetime of facing fears, learning from mistakes, and continually acknowledging that there are no shortcuts to living an examined life. Maggie Frank

A book on inner and outer courage from Mark Nepo, author of The Book of Awakening (recently listed as one of "Oprah's Ultimate Favorite Things").

Mark Nepo is a beloved teacher, poet, and storyteller. In this book he invites us to live from our inner core in ways small and large, every day. That is all we can do in life, and all we need for our lives to bear witness and contribute, to make the world a better place. To listen to the stories in this book is to find our own place of courage and peace.