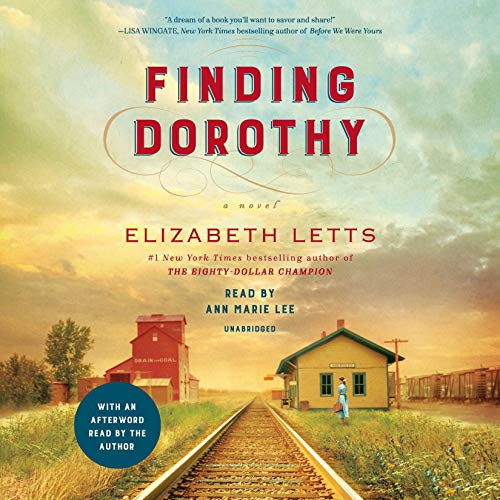 This richly imagined novel tells the story behind The Wonderful Wizard of Oz, the book that inspired the iconic film, through the eyes of author L. Frank Baum’s intrepid wife, Maud.

“A breathtaking read that will transport you over the rainbow and into the heart of one of America’s most enduring fairy tales.” (Lisa Wingate, author of Before We Were Yours)

Hollywood, 1938: As soon as she learns that M-G-M is adapting her late husband’s masterpiece for the screen, 77-year-old Maud Gage Baum sets about trying to finagle her way onto the set. Nineteen years after Frank’s passing, Maud is the only person who can help the producers stay true to the spirit of the book - because she’s the only one left who knows its secrets.

But the moment she hears Judy Garland rehearsing the first notes of “Over the Rainbow,” Maud recognizes the yearning that defined her own life story, from her youth as a suffragette’s daughter to her coming of age as one of the first women in the Ivy League, from her blossoming romance with Frank to the hardscrabble prairie years that inspired The Wonderful Wizard of Oz. Judy reminds Maud of a young girl she cared for and tried to help in South Dakota, a dreamer who never got her happy ending. Now, with the young actress under pressure from the studio as well as her ambitious stage mother, Maud resolves to protect her - the way she tried so hard to protect the real Dorothy.

The author of two New York Times best-selling nonfiction books, The Eighty-Dollar Champion and The Perfect Horse, Elizabeth Letts is a master at discovering and researching a rich historical story and transforming it into a pause-resister. Finding Dorothy is the result of Letts’s journey into the amazing lives of Frank and Maud Baum. Written as fiction but based closely on the truth, Elizabeth Letts’s new book tells a story of love, loss, inspiration, and perseverance, set in America’s heartland.

“In some ways reminiscent of Jerry Stahl’s excellent I, Fatty, Letts’ Finding Dorothy combines exhaustive research with expansive imagination, blending history and speculation into a seamless tapestry.... It’s a testament to Letts’ skill that she can capture...that same emotion we have all felt sometime over the last 80 years while listening to ‘Over the Rainbow.’” (BookPage, starred review)

“Old Hollywood is its own kind of Oz in Finding Dorothy, complete with false dazzle and complex combinations of threat and allure. But what really satisfies here is the unlikely friendship between L. Frank Baum’s unsinkable widow, Maud, and the young Judy Garland, on the vulnerable cusp of fame. It’s an alliance that seems touched with magic and serendipity and something even more transformative, true understanding between women.” (Paula McLain, author of Love and Ruin)

“Maud [Gage Baum] is a fascinating character, and this is a poignant, absorbing tale of the life and love story that led to the creation of a beloved classic.” (Booklist)

“Readers looking for an inspiring true story will be delighted.... [Letts] again crafts a tale of fortitude and triumph over adversity.... Fans of the Oz novels or film will be enchanted. This is a great fit for readers of Christina Baker Kline and Lisa Wingate, and will surely be a popular choice for book clubs.... [A] well-researched novelization.” (Library Journal)