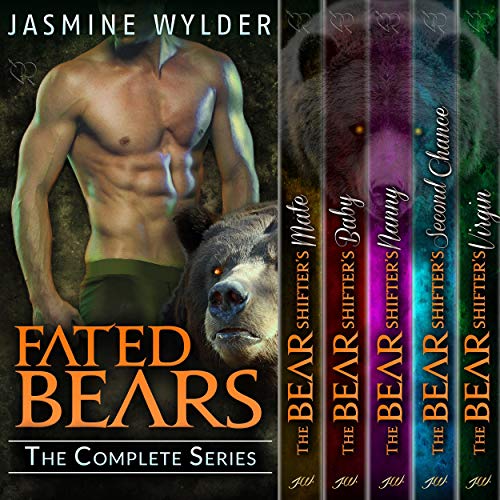 Book One: The Bear Shifter's Virgin
Rebecca Lake is a curvy world-famous author, who doesn’t have time for any neighborhood chatting. Unless the neighbor is the extremely hot, mysterious billionaire Isaias Durant with his rock-hard body that Rebecca can’t take her eyes off of. There is no way that this piece of art is attracted to her...the shy virgin. Or is there?

Book Two: The Bear Shifter's Second Chance
She doesn’t need that sort of relationship in her life, right? It's hard to keep that in mind when Adela Choi sees Marcus Haught drive up on his motorcycle, his tattoos rippling over his hard muscles. So utterly mouth-watering that she can hardly think around him. Not to mention his animal side, that used to make Adela howl. But she has to stay strong, for her and her little toddler. People just don't change, and she isn't about to be hurt again.

Book Three: The Bear Shifter's Nanny
It's not easy being a shifter without a clan. But finally, Jasmine Rowland has a job at least. Well, being a nanny is not what she had dreamed of, but it pays the bills. Also, there are worse places to be than around that handsome Doctor Alava with his tight clothes, showing every vein and muscle of his body. But something is definitely wrong with him. What is he hiding?

Book Four: The Bear Shifter's Baby
Lori Rowlands is done with the loser boyfriends she’s always picked; the kind that would play for a while and then leave her high and dry. She wants something sweet but passionate, where they can count on one another in a crisis. And that means her new boss, the rich, delicious lawyer Clifford Boone, is off limits. Or, isn’t he? A little play can’t hurt anybody, right?

Book Five: The Bear Shifter's Mate
Serena Boone always knew it. Being the new matriarch of her bear shifter clan comes with big responsibility. Nothing she couldn’t handle alone, but now she has to be protected during the transition of power. But why does her protector have to be one hot and sexy masterpiece? He can’t be her mate. Mates are chosen in traditional fights.

Author´s Note: This is a collection of paranormal romances with HEA, so no cliff-hangers! The collection contains mature themes and language, and is intended for 18 and up listeners only.