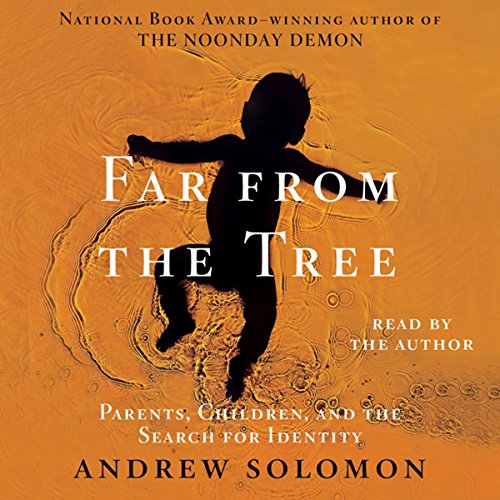 Far from the Tree

From the National Book Award-winning author of the "brave...deeply humane...open-minded, critically informed, and poetic" (The New York Times) The Noonday Demon, comes a game-changer of a book about the impact of extreme personal and cultural difference between parents and children.

A brilliant and utterly original thinker, Andrew Solomon's journey began from his experience of being the gay child of straight parents. He wondered how other families accommodate children who have a variety of differences: families of people who are deaf, who are dwarfs, who have Down syndrome, who have autism, who have schizophrenia, who have multiple severe disabilities, who are prodigies, who commit crimes, who are transgender. Bookended with Solomon's experiences as a son, and then later as a father, this book explores the old adage that says the apple doesn't fall far from the tree; instead some apples fall a couple of orchards away, some on the other side of the world.

In 12 sharply observed and moving chapters, Solomon describes individuals who have been heartbreaking victims of intense prejudice, but also stories of parents who have embraced their childrens' differences and tried to change the world's understanding of their conditions. Solomon's humanity, eloquence, and compassion give a voice to those people who are never heard. A riveting, powerful take on a major social issue, Far from the Tree offers far-reaching conclusions about new families, academia, and the way our culture addresses issues of illness and identity.

"In Far from the Tree, Andrew Solomon reminds us that nothing is more powerful in a child's development than the love of a parent. This remarkable new book introduces us to mothers and fathers across America - many in circumstances the rest of us can hardly imagine - who are making their children feel special, no matter what challenges come their way." (President Bill Clinton)

"This is one of the most extraordinary books I have read in recent times - brave, compassionate and astonishingly humane. Solomon approaches one of the oldest questions - how much are we defined by nature versus nurture? - and crafts from it a gripping narrative. Through his stories, told with such masterful delicacy and lucidity, we learn how different we all are, and how achingly similar. I could not put this book down." (Siddhartha Mukherjee, Pulitzer Prize-winning author of The Emperor of All Maladies)

"An informative and moving book that raises profound issues regarding the nature of love, the value of human life, and the future of humanity." (Kirkus)

I was blown away by this book! An amazing opportunity for introspection for anyone, parent or not. Solomon chooses every word with such care and digs so deep into so many identity-related issues that you're left wanting for more, even at the end of such a long book. Also, expect to get goosebumps & be brought to tears often.