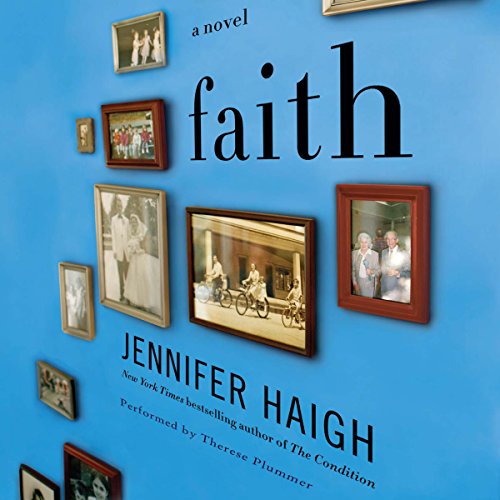 A Boston priest is accused of molesting a boy in the wake of the 2002 scandals in Jennifer Haigh’s affecting novel, masterfully performed by Therese Plummer.

A veteran and prolific narrator, Therese Plummer perfectly captures the Boston Irish Catholic ethnic enclave. Plummer’s Boston accent is spot on and the overall performance adds an immediacy to the experience. Listeners can almost hear the beer cans clanging at the family events and the rosary beads clacking at mass. Plummer effortlessly switches among distinct and varied characters and never goes over the top.

The narrator had great material to work with; Jennifer Haigh’s haunting tale will stay with the listener for a long time. Mrs. Kimble, Baker Towers, and The Condition showed Jennifer Haigh’s ability to create beautifully written, character-driven novels. Her strong writing continues with this latest effort. Readers will want to hit the pause button a few times to savor some gorgeous sentences. In Faith, Father Arthur’s tale, as well as his family’s, is told from the perspective of his loyal half-sister, Sheila. Arthur, a local boy and apple of his mother’s eye, had been with the Catholic Church since he was a boy. The allegations of child molestation shock the family and Sheila seeks to figure out what exactly happened. Haigh spins a tale of the complexities and secrets of a family. Its flawed members are all very human and relatable; each character, in turn, earns the reader’s frustration and sympathy. The issues raised result in a sometimes uncomfortable but always thought-provoking listen.

Jennifer Haigh and Therese Plummer create an impressive listen, tackling family, faith, and truth, all amid a shocking and painful chapter in recent American history. It’s a formidable task but it is done with grace and compassion. Listeners and book group participants should put it at the top of their lists.  Julie MacDonald

It is the spring of 2002, and a perfect storm has hit Boston. Across the city's archdiocese, trusted priests have been accused of the worst possible betrayal of the souls in their care. In Faith, Jennifer Haigh explores the fallout for one devout family, the McGanns.

Estranged for years from her difficult and demanding relatives, Sheila McGann has remained close to her older brother, Art, the popular, dynamic pastor of a large suburban parish. When Art finds himself at the center of the maelstrom, Sheila returns to Boston, ready to fight for him and his reputation. What she discovers is more complicated than she imagined. Her strict, lace-curtain-Irish mother is living in a state of angry denial. Sheila's younger brother, Mike, to her horror, has already convicted his brother in his heart. But most disturbing of all is Art himself, who persistently dodges Sheila's questions and refuses to defend himself.

As the scandal forces long-buried secrets to surface, Faith explores the corrosive consequences of one family's history of silence - and the resilience its members ultimately find in forgiveness. Throughout, Haigh demonstrates how the truth can shatter our deepest beliefs - and restore them.

A gripping, suspenseful tale of one woman's quest for the truth, Faith is a haunting meditation on loyalty and family, doubt and belief. Elegantly crafted, sharply observed, this is Jennifer Haigh's most ambitious novel to date.