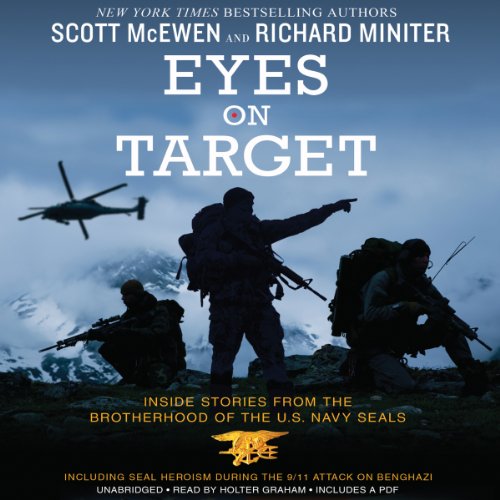 Told through the eyes of current and former Navy SEALs, Eyes on Target is an inside account of some of the most harrowing missions in American history-including the mission to kill Osama bin Laden and the mission that wasn't, the deadly attack on the US diplomatic outpost in Benghazi where a retired SEAL sniper with a small team held off one hundred terrorists while his repeated radio calls for help went unheeded.

The book contains incredible accounts of major SEAL operations-from the violent birth of SEAL Team Six and the aborted Operation Eagle Claw meant to save the hostages in Iran, to key missions in Iraq and Afghanistan where the SEALs suffered their worst losses in their fifty year history-and every chapter illustrates why this elite military special operations unit remains the most feared anti-terrorist force in the world.

We hear reports on the record from retired SEAL officers including Lt. Cmdr. Richard Marcinko, the founder of SEAL Team Six, and a former Commander at SEAL team Six, Ryan Zinke, and we come away understanding the deep commitment of these military men who put themselves in danger to protect our country and save American lives. In the face of insurmountable odds and the imminent threat of death, they give all to protect those who cannot protect themselves.

No matter the situation, on duty or at ease, SEALs never, ever give up. One powerful chapter in the book tells the story of how one Medal of Honor winner saved another, the only time this has been done in US military history.

Through their many interviews and unique access, Scott McEwen and Richard Miniter pull back the veil that has so often concealed the heroism of these patriots. They live by a stringent and demanding code of their own creation, keeping them ready to ignore politics, bureaucracy and-if necessary-direct orders. They share a unique combination of character, intelligence, courage, love of country and what can only be called true grit.

They are the Navy SEALs, and they keep their Eyes on Target.

this book is not so much The story of the Navy seals, but primarily an ongoing rent against uncaring politicians, incompetent officers and whatever Else the authors feel a grudge against. while in some way this is a welcome change to the usual Seal propaganda books, in the end the authors spend way too much time ranting and too little time telling the actual story of the Seals.