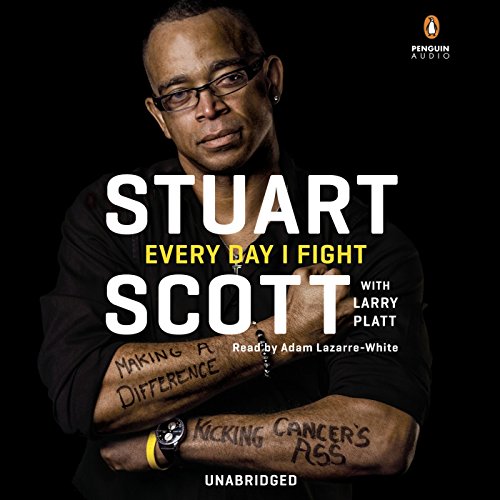 Every Day I Fight

Every Day I Fight

"When you die, it does not mean that you lose to cancer. You beat cancer by how you live, why you live, and the manner in which you live." (Stuart Scott)

Shortly before he passed away, on January 4, 2015, Stuart Scott completed work on this memoir. It was both a labor of love and a love letter to life itself. Not only did Stuart relate his personal story - his childhood in North Carolina, his supportive family, his athletic escapades, his on-the-job training as a fledgling sportscaster, his being hired and eventual triumphs at ESPN - but he shared his intimate struggles to keep his story going. Struck by appendiceal cancer in 2007, Stuart battled this rare disease with an unimaginable tenacity and vigor. Countless surgeries, enervating chemotherapies, endless shuttling from home to hospital to office and back - Stuart continued defying fate, pushing himself through exercises and workout routines that kept him strong. He wanted to be there for his teenage daughters, Sydni and Taelor, not simply as their dad but as an immutable example of determination and courage.

Every Day I Fight is a saga of love, an inspiration to us all.

One of my all-time favorites

Stuart Scott was a household name in sports broadcasting (in the US that is), but you don't have to be into US sports to love this book. However, if you are familiar with US sports, particularly the NBA and the NHL, you will enjoy Scott's memoir even more.

What makes this book exceptional and unique is the brutal honesty with which Stuart Scott is talking life, his life. I have read quite a few autobiographies and none has compared in terms of raw honesty. Scott finished this book knowing he was soon about to die. Virtually at the peak of his career, he literally finished the book on his dying bed. In my opinion, these circumstances allowed him to express himself as freely and real as humanly possible.

The passion Scott had for life shines through in every part of his story. Although he could not read the audiobook himself, it feels as though he is directly talking to you. His approach to life and the way he dealt with the challenges that he faced - there is more than "just" cancer - is for a lack of a better word inspiring. If you are looking for a book to inspire you, look no further.